A Priest from Aleppo: “God Wants Me to Be Here Till the End” 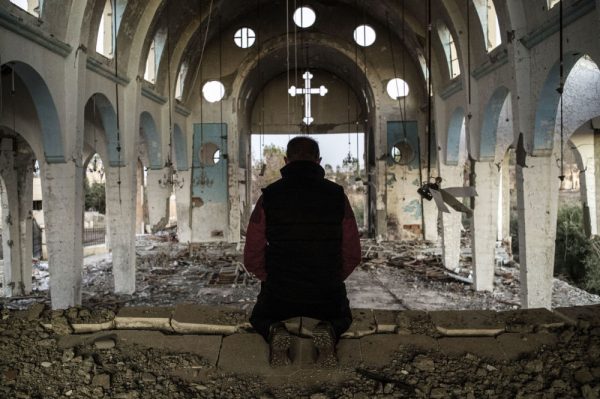 Aleppo was Syria’s largest city before the civil war. Today East Aleppo is bombed almost daily by Syrian and Russian air forces; its west is frequently shelled by the rebels from the east. Only a small number of the more than 200,000 ‘pre-war’ Christians remain in the city: some church leaders say it’s only 20,000 to 40,000.

Pastor Alim (*name changed for security reasons) works in Aleppo. His congregation is helping up to 2,000 needy families each month — Muslims and Christians — through a team of motivated people.

“The situation in Aleppo has been unstable for a long time now. Ceasefires only last for a short time. As soon as the people catch breath, the fighting starts again.”

His city is divided; he is in the part controlled by the government. “People get really depressed; they feel there is no hope”

“Many women and children from the other part have come to our area. Our church is able to help a total of 2,000 families; I think half of them are Muslims.”

Alim’s church offers food and other necessities. “We help some of them pay their rent and offer towards their medical needs. Our church has dug a well to provide clean drinking water,” he adds.

War is an ever present reality. “The other day, as we finished our meeting on Friday, a bomb exploded next to the church, killing a young girl and her brother. On Sunday, when we were getting ready for church, bombs exploded around our house,” said Alim.

Despite too many unanswered questions, Alim says his flock find a new depth of faith. “We have passed through very difficult situations, we don’t know why we feel such a peace and hope! I think God is giving us double grace. That’s why I don’t feel ‘seduced’ to leave — although doors are open for me…”

“There is hunger to come closer to God! There is hunger for the prayer meetings for example. Now the whole congregation comes to these meetings. The church is full of people praying.”

This hunger is not just from Christians.

“It happens more with the Muslims and the Druze. God is speaking the language of each group. Muslims meet Jesus in dreams. A woman saw a man in a dream, he was dressed in white and his face was shining. She woke up and went to church, she was very afraid of being rejected. She was accepted with love.”

Several news media have reported that numbers of ex-Muslim refugees in Europe are ‘coming out’ as Christians. Alim says the seeds of such change have started long before that — on home soil in Syria.

“Before the war, authorities put a lot of pressure on Muslim converts, investigating and interrogating them. We continued serving them, went with them to the police, and because of that they felt the Church didn’t leave them.”

Choosing to stay is never easy.

“Two of my brothers are living in Germany. They put a lot of pressure on us to come and join them,” Alim says.

“I feel a calling of God. He wants me to be here till the end, as long as there is work to do in Aleppo. It wasn’t an easy decision. My wife has the same calling. I tried to persuade her to move to a safer area. She didn’t want to; she wants to be with me.”

“Our son was five when the war started. He had a kind of break from the war in another safer area in Syria. When he was there, he didn’t want to come back home to hear the sound of explosions. This summer we again spent some time with the family in a safer area. He had nightmares because of the bombs.”

“We used to live on the fourth floor, very close to the frontline, the so-called ‘red line’. We moved further away to my parents’ house. Shortly after, a rocket hit very close to our apartment. One of our relatives died, shrapnel hit our house and broke through the walls.”

Alim can’t bring himself to imagine the scene if his children had been there, playing, at the moment of impact. “Every day we hear of someone who has died, every day we are surrounded by death. We feel the pain, but for those who died we cannot do anything. We can make a difference for the living, we can help them.”

Beyond the clouds of war, Alim can see a silver lining: “Because of the crisis, bridges are being built with people we never had contact with before. We started visiting families, we organise camps for children who are not Christians, and their mothers also come.”

“Before we heard people saying: ‘Here come the infidels’. Now people are different”

Recently there was another influx of displaced people from other areas in Aleppo; some displaced for the second time. “They stayed in schools, mosques and in unfinished buildings. Our church took the initiative to visit them,” Alim recalled.

“What we see and hear is often heart-breaking. Yet these people now see what the church does. There is now a greater appreciation for its role. Before, people reacted differently towards the church. Before, as we were distributing food, we heard people saying: ‘Here come the infidels’: now people are different.”

The face of Christianity is changing in Aleppo.

“Each year we baptise some 15 to 20 people — and an equal number are new believers who cannot be baptized because of community pressure,” Alim says.

Yet the loss of Christianity leaves a big cultural impact on the country. “I think that in Aleppo only 30,000 Christians remain; about 20 per cent of the pre-war figure.

“If all the Christians left Syria, the situation wouldn’t be the same. Christians maintain a balance in society, it is essential for us to stay.”

Still the urge for normalcy persists: “People want to take a breath. They want rest! Pray for an agreement to end the fighting so that we can live a normal life again,” says the pastor.