The Churches in Europe working group of the St. Petersburg Dialogue of civil societies in Russia and German meet in St. Petersburg

Source: DECR
Natalya Mihailova | 08 June 2014
On June 5, 2014, the Churches in Europe working group of the St. Petersburg Dialogue, a forum of civil societies in Russia and Germany, met in St. Petersburg to discuss the theme “Understanding of Religious Freedom in the Democratic Society”. 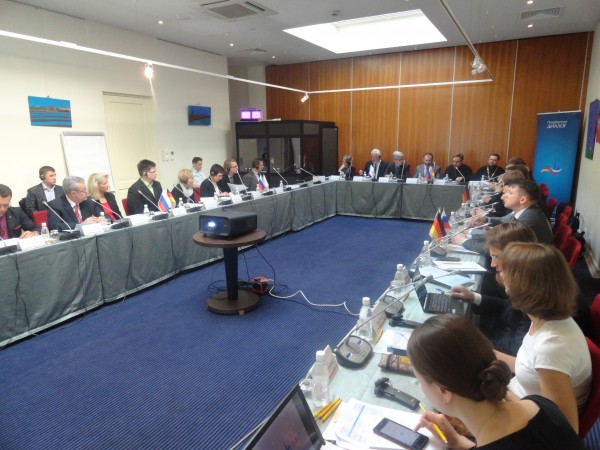 The German side was represented by Dr. J. Oldemann, director of the Johann Adam Möhler Ecumenical Institute and co-chairman of the Churches in Europe working group, Probst S. Kasparik, reformation and ecumenism officer in the Evangelical Church in Central Germany, Prof. Dr. E. Schockenhoff, Freiburg University; Dr. Ch. Rebenstorf, Social Sciences Institute of the Evangelical Church in Germany; and others.

The meeting was co-chaired by V. Kipshidze and Dr. J. Oldemann.

Papers were read by V. Kuznetsov on “Religious freedom in the Russian Federation’s constitutional legal doctrine, A. Maler on “The Christian foundations of the European identity”, Dr. Rebenstorf on “Religion and democracy: Expectations of democratic societies from the Church and religion”, Dr. Schockenhoff on “The right to a free and unimpeded search for the truth. Religious freedom and secular state”.

The meeting discussed the legal regulation of religious freedom in Russia and German today, problems involved in implementing freedom of religion in the public space and relationships between freedom of faith and the democratic public order.

The St. Petersburg Dialogue is a forum of the civil societies in Russia and Germany. Established in 2001 at the initiative of Russian President V. Putin and German Chancellor G. Schroeder, it is called to promote mutual understanding between Germany and Russia and comprehensive bilateral cooperation. It consists of 100-150 participants from each side. They represent various issue groups.

The Churches in Europe working group is the “youngest” unit in the Dialogue’s structure. It first met in 2007 in Wiesbaden. It includes representatives of Christian confessions in Russia and Germany.

Most viewed articles
Maronite Patriarch Thanks Russian Patriarch for His Support for Christians in the Middle East98
Athens and Jerusalem: the Role of Philosophy in Faith, with Analysis by St. Gregory Palamas83
Food for the Journey82
The pandemic is a significant examination for us all, Transylvania Metropolitan says67
Fire Destroys Main Building with the Church of St. Peter Convent in Pavlodar63
Orthodox Priest Rescues Two People from Fire in Constanța55
We Are Not Saint Mary of Egypt (But We Can Still Repent)41
Most popular authors
Pravmir.com team161
Aurelian Iftimiu122
Eric Hyde83
Dcn. Michael Schlaack82
Archpriest Geoffrey Korz40