Churches won’t get into politics: Head of Egyptian churches council

Head of a council bringing together Coptic Orthodox, Catholic, Anglican, Evangelical and Greek Orthodox churches says the churches will not back a particular presidential candidate. 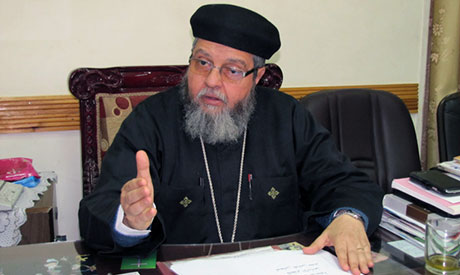 The head of the Egyptian council of churches, a grouping that brings together the Coptic Orthodox, Catholic, Anglican, Evangelical and Greek Orthodox denominations, has said that the group will not back a particular candidate in the coming presidential elections.

“The council has no political role but participates in national duties because we are part of this nation,” said Father Bishoy Helmi Amin in an interview with Al-Ahram Arabic marking the first anniversary of the formation of the council.

Amin said the church does not get into politics and should not “urge” people to vote for a particular candidate, referring to military chief Abdel-Fattah El-Sisi, who is yet to announce a presidency bid but is largely expected to win if he does.

“The public is now aware of who is best to serve the country and would be faithful to it,” Amin said.

The council was formed by Pope Tawadros II, head of the Coptic Orthodox Church, to which around 90 percent of Christians in Egypt belong. His predecessor Pope Shenouda had had the initial idea, according to Bishop Helmi Amin, the head of the council.

During its first year, Amin said the council had held a joint conference bringing together representatives of the five churches, and had attended local and international conferences about Christians in the Middle East and about national unity.

He said the council had also had to cancel some of its planned activities because of the political instability.

The country has seen a wave of violence on the street as well as a militant insurgency since Islamist president Mohamed Morsi was ousted in July.

Christians, who make up about 10 percent of the country’s population, have regularly complained of a lack of rights and opportunities, and attacks by Islamist extremists.

The new constitution, however, contained some provisions that address Christian grievances, including criminalising arbitrary forced displacement.

Another article states that “the parliament shall issue a law to organise building and renovating churches, guaranteeing Christians the freedom to practice their religious rituals.”

The constitution was part of a roadmap which also includes presidential and parliamentary elections by summer 2014.

The council, formed of 13 committees, is also targeting “a wave of atheism,” he said.

“In their rebellious attitude against all that is traditional, superior, or in power, some of them deviate to denying God’s existence,” Amin said. “We organise workshops, books and films to counter the argument.”

The council is also tackling the idea of union between different Christian denominations.

“We should understand unity will not just come; there are extremists everywhere, but when the leaders of the different churches meet, the good spirit is passed on to successive generations,” he said.