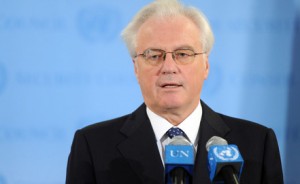 The abduction of two Christian bishops in Syria indicates that extremists are willing to deepen contractions between religious communities, Russian ambassador to the United Nations Vitaly Churkin said.

“We condemn the capture by the armed opposition of Aleppo metropolitans of the Greek Orthodox and Syriac Orthodox Churches. This criminal provocation once again confirms that the extremists are staking on aggravating ethnic and religious contradictions,” he said at a UN Security Council session.

“This can only mean that either the coalition leaders do not deserve confidence or don’t control the situation as the incident took place near the Turkish border in so-called liberated territories that are receiving generous foreign assistance,” the diplomat said.

It was reported earlier that militants captured two Christian bishops near the Syrian-Turkish border. The bishops became the most high-ranking Christian clergymen to be captured during two years of the conflict in Syria.