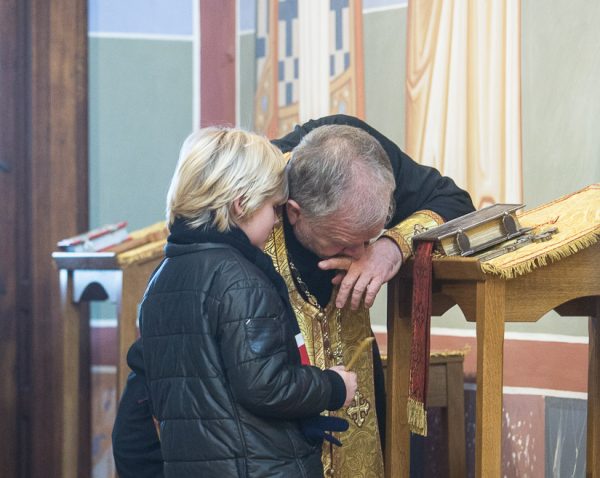 What do we confess in confession?

The most important thing that we say in confession has little to do with what we say.  The most important thing is what is in our heart, or the condition of our heart in confession.  When we come to confession, many words are not necessary.  In fact, many words generally only muddy the water and reveal a mind that is not settled, but is rather still self-justifying, still trying to “get a handle on it” as though you could actually fix this problem yourself if you could only just figure it out.

There is no figuring it out in confession, but there can be revelation.  In fact, so long as we continue trying to figure ourselves out, we will run in circles.  As dogs chase their tails, human beings chase their thoughts.  Around and around and around.  The same arguments, the same frustrations, the same dead ends.  Around and around and around.  We have to stop running.  We have to stop chasing.  We have to admit, we have to confess, that we will never catch it, we will never figure it out—and even if we did, even if we did figure out why we sin in the many broken ways we do, still then, there would be nothing we could do about it.  Catching her tail, the dog only bites herself.

When God revealed Himself to mankind, He revealed humility.  This is what God showed us about himself when He revealed Himself to mankind, this is the quality that most defines God for us: love revealed by humility.  This is how God reveals Himself: Not by power.  Not through justice.  But in Humility.  God, who is whole, took on himself that which is contingent to teach us the way, to teach us that in accepting our contingency, dependence, inability, and brokenness we begin to imitate God.  We begin to find salvation.

We are stuck on fault, on guilt, yet fault is not the issue.  Like a sick child who has caught a cold playing in the rain.  Figuring out how he caught the cold does not help heal the cold.  But to heal the cold, we have to first acknowledge that we are sick, that we are sick and cannot heal ourselves.  This is why we come to confession.  We come to confession to say that we are sick, that our body and mind is out of control, that we need a physician.  And just this act, this act of contrition, this act of humbling ourselves, and saying out loud: “I am badly broken and I cannot fix myself,” this act begins to heal us.  Why?  It begins to heal us because we have already begun to see reality, to see who we really are, and to find the place where God meets us.

God saves the poor and needy, but for a rich man to enter the Kingdom of Heaven is almost impossible.  The way a rich man can enter the Kingdom is by seeing his poverty.  It is the broken and humbled heart God does not despise.  When in a few words, with simplicity, we can admit our failings, our brokenness, our faults, then the pain in our heart speaks.  This pain is called compunction.  And when compunction speaks, few words are needed, simplicity is everything, explanations are meaningless.