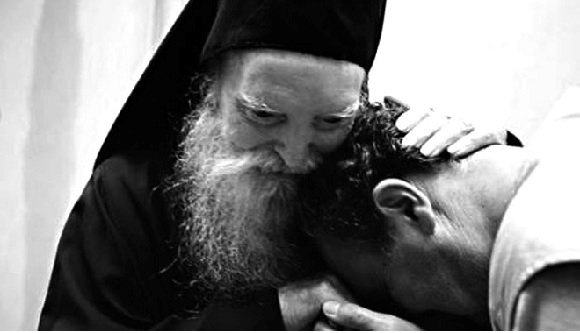 Somebody steals two hens from the priest’s henhouse and after a while decides to go and confess.

‘Me? No. Give them back to the man you stole them from’.

Very often, our own intention’s the same: to prevaricate, that is to avoid telling the whole truth. This is why I thought, given the time of year, that I might make a couple of clarifications on this enormous subject and the many confusions it usually gives rise to. We think that going to confession means being taken to court.  In fact, lots of people even say, when they come for confession: ‘How will you judge me now, father?’ They seem to think they’re before a judge, even if he is one of God’s, so of course they’re worried and afraid, as we all are in court. But if you do think of confession as a court, then you should know that it’s the only one that hands down innocent verdicts. Because you go to confession to be declared innocent, not to be condemned. You go precisely to avoid the guilty verdict. So you can understand how mistaken it is, in such a genuinely well-motivated action, to confuse things, either consciously or unconsciously.

Before, when we heard that little joke, it seemed funny to us, that the man tricked the priest so that he was formally in the right, but in fact, was being devious.

This is precisely where some issues come in which require explanation. What does repentance mean? What is it? It’s a question that’s full of misunderstandings. Let’s start from further away.

When we hear the word, what do we immediately think? That it’s a Church word, a religious word, an expression from religious language. But how many languages are there? Is our religious experience within our life or outside it? Maybe, in the end, it’s foreign to our life. Very often, we make the following confusion. We imagine our relationship with the Church to be a part of our life which is somehow in the margin; an occasion for a feast (Christmas or Easter); or an event that doesn’t really affect all of us, but does a bit, either in thought alone or in some corner of our brain, if you like. And most people today, those who live in the here and now (as we do, though sometimes we’re in a world of our own) think that these are activities that don’t concern them. It may be that we’re to blame for their attitude. We ourselves have got a wrong perspective on this, they see that and understand it even more erroneously. They see it and say: ‘That doesn’t concern us. I’ve got no intention of digging around in the muck’. Because they see confession as a concern with things that are rotten, dirty, wrong. These issue have ended up as stereotypical phrases. There’s a stereotypical Church language, which talks about ‘the spiritual life’, ‘the spiritual person’, ‘what are you doing in your spiritual life’. How many lives do we have? Only one, not two. None of us can be two people, one for ordinary days and another for Sundays; one for formal occasions and another for informal ones; one who’s out in the open and another who’s hiding; one who wants to be seen and another who works behind a curtain. And these kinds of confusions all start out, as I said before, because our religious life isn’t the whole of our life.

If we define ‘religious life’, this hamstrings the prospect of what we’ve described as ‘the religious life’ ever becoming the whole of our life What do we imagine? I went to church? I observe certain things, more or less? I’m fine, then. From here on in I can do this, that or the other. But the teaching of the Church and the healthy reality of things says that Christ is the Church. And the Church is life for people. Unless we get this straight within ourselves, we get it muddled.

Very often, in our minds we think that the religious life has to do with God and that…