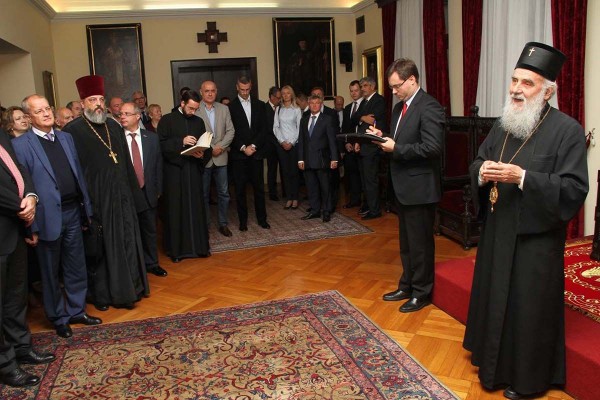 The Russian Orthodox Church’s official delegation was led by Bishop Nazary of Kronstadt, abbot of the St. Alexander Nevsky Laura of the Holy Trinity.

On September 16, a Russian-Serbian round-table conference was held in the Russian House in Belgrade. Historians from Russia and Serbia as well as other countries considered questions concerning the preconditions, beginning and course of the military actions and the peculiarities of the post-war period.

On the same day, the participants in the events visited the restored Russian necropolis in Belgrade and laid wreaths at the memorial to the fallen defenders of Russia and Serbia. Russian compatriots are buried in the Novo Groble Cemetery, the largest Russian burying place abroad, with over 3 thousand Russian buried in it, including 1360 generals, officers and soldiers who fought in World War I.

In the evening of that day, the participants in the commemorative events met with His Holiness Patriarch Irenaeus of Serbia.

On September 17-18, an international academic-pubic conference on “The Great War and the Beginning of a New World: Topical Agenda for Humankind” was held at the Sava Center. It was organized by the St Andrew the-First-Called Foundation, the Center of National Glory and the Serbian public organization “The Belgrade Forum for a Peace of the Equals”. It was a broad international dialogue between scholars and the public on the impact made by World War I on the present condition of the international relations system and its geopolitical, civilizational and axiological dimensions.

The conference worked in plenary sessions and panel discussions devoted to such themes as “Global Wars and Global Historical Transformations”, “World War I – Why and What For?”, “World War I in the Philosophy and Values Dimension”, “World War I as a Historical Edification for Humankind”.

During the opening of the conference, Bishop Nazary read out a message of greetings from the Primate of the Russian Orthodox Church. Messages of greetings were also received from Serbian President Tomislav Nikolic and Russian State Duma Speaker Sergey Naryshkin.

The working session opened with a paper presented by V. Yakunin, chairman of the Board of Patrons of the St. Andrew Foundation and president of the Russian Railways company.

Present at the opening of the conference were Patriarch Irenaeus, Czechia’a ex-president Vaclav Klaus, Russian Ambassador A Chepurin, Prince Alexander II of Serbia and other dignitaries.

In the evening of September 17, a grand concert took place at the Sava Center, in honour of those who fell in action for the liberation of Serbia. It was broadcast live by the Serbian television.

After the conference finished its work on September 18, its participants came to the Tashmaydan Park to lay wreaths at the memorial to the children who were killed during the NATO bombardment of Yugoslavia in 1999.

This was followed by the requiem service at St Michael’s in memory of the Russian and Serbian soldiers who fell in World War I. After the service a procession with the cross was held from the cathedral to the Kalemegdan fortress to open a commemorative symbol in honour of the soldiers who were killed defending the fortress.

The commemorative events concluded with a solemn reception at the Russian Embassy in Serbia.