Source: DECR
Natalya Mihailova | 14 May 2018
On 5 May 2018, as part of the commemorative events marking the 95th anniversary of the exodus of the First Army Corps of General Vrangel’s Russian Army from Turkey, a delegation of St Andrew Foundation, led by Mr. Vladimir Yakunin, visited the Patriarchate of Constantinople and met with Metropolitan Elpidophoros of Bursa. 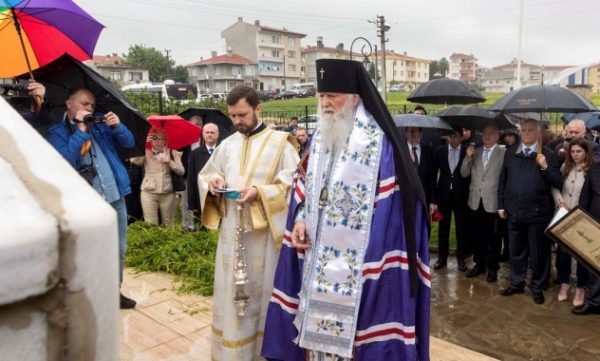 Taking part in the meeting were also Archbishop Michael of Meudon (Russian Church Abroad); Archimandrite Joachim (Billis), chief secretary of the Holy and Sacred Synod of the Patriarchate of Constantinople; Archimandrite Panaret (Psarevtis), rector of the Metochion of the Athonite St Andrew Skete in Istanbul; Mr. Pyotr Stegniy, former Russia’s Ambassador to Turkey; Mr. Sergei Mironenko, head of research at the State Archive of the Russian Federation; and Hierodeacon Grigoriy (Sokolov), staff member of the Moscow Patriarchate’s Department for External Church Relations.

In the morning of the following day, with the blessing of His Holiness Patriarch Bartholomew of Constantinople, Archbishop Michael of Meudon celebrated a requiem service at the memorial to the Russian soldiers in the town of Gelibolu. The memorial reconstructed in 2008 commemorates the soldiers of General Kutepov’s Army Corps who died and were buried there in 1920-21.

On May 7, a round table on Russia and Turkey in Dialogue of Cultures took place at the Galatasaray University in Istanbul. That same day in the evening, a reception was held at the Russian Consulate-General.

In 1920-21, several divisions of General Wrangel’s Russian Army evacuated from the Crimea were stationed in the Gallipoli peninsula. On 22 November 1921, the Society of the Russians of Gallipoli, one of the military organizations of the Russian émigré community, was established.