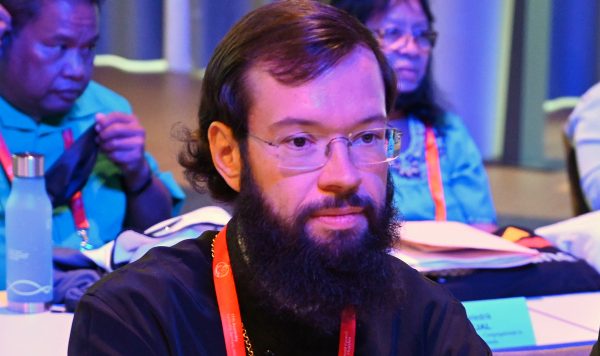 The Chairman of the Department for External Church Relations of the Moscow Patriarchate, Metropolitan Anthony of Volokolamsk who leads the Russian Orthodox Church’s delegation at the 11th Assembly of the World Council of Churches (August 31-September 2022, Karlsruhe, Germany) commented on the statement made by President of Germany Steinmayer who, in his speech at the opening of the forum, cast doubt om the relevance of the participation of a delegation of the Russian Orthodox Church in the Assembly.

On August 31, at the opening session of the Assembly, the participants in the forum were addressed by President of Germany F.-W. Steinmayer who in his speech cast doubt on the relevance of the participation of a delegation of the Russian Orthodox Church in the WCC Assembly.

The President of Germany’s address contained completely unsubstantiated accusations fully ignoring all the humanitarian efforts the Moscow Patriarchate made in the context of the confrontation in Ukraine as well as an outright demand that the WCC Assembly should condemn the Russian Orthodox Church.

I believe that the Mr. F.-W. Steinmayer’s position is an example of rude pressure made by a high-ranking representative of state power on the oldest inter-Christian organization. It is interference in the internal affairs of the World Council of Churches, an attempt to question the peace-making and politically neutral nature of its work.

It is noteworthy that the WCC acting secretary Archpriest John Sauka, who spoke before Mr President, on the contrary pointed to the importance of the presence of the Moscow Patriarchate representatives at the Assembly, since this lies in the very nature of the largest inter-Christian organization called to promote dialogue, peace and mutual understanding.

This publicly expressed position of the leadership of the World Council of Churches, as well as numerous addresses made by the WCC Assembly delegates from Germany and other states to the delegation of the Russian Orthodox Church show that the President of Germany’s accusations of the Church have not met with the support he expected.

I hope that the World Council of Churches will continue to be an independent platform for dialogue that does not follow in its work a bias political order of particular states but rather the aim of asserting peace and harmony.