Source: DECR
Natalya Mihailova | 10 February 2016
On 5-7 February 2016, the Commission for Dialogue between the Russian Orthodox Church and the Coptic Church held in Cairo its first session. 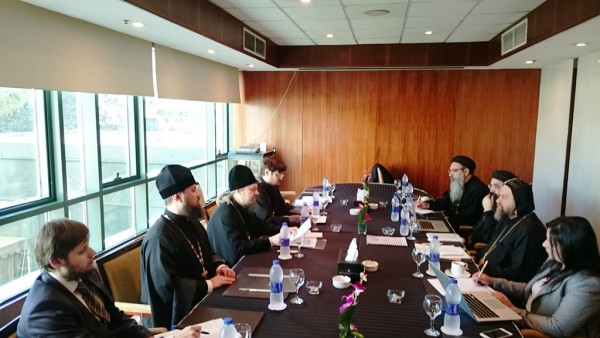 An agreement to establish the Commission was reached during the meeting between His Holiness Patriarch Kirill of Moscow and All Russia and His Holiness Coptic Patriarch Tawadros II. That meeting took place during the visit that the Primate of the Coptic Church made to Russia in the period from October 28, to November 4, 2014. The first meeting of the joint working group for preparing the dialogue took place in Cairo on February 13, 2015. The Holy Synod of the Russian Orthodox Church and the Synod of the Coptic Church approved the list of the Commission members, the former on May 5, 2015, and the latter in July 2015.

Representing the Moscow Patriarchate at the meeting were: Bishop Gennady of Kaskelen, co-chairman of the Commission; Hieromonk Stefan (Igumnov), DECR secretary for inter-Christian relations; Rev. Viktor Kulaga, representative of the Patriarch of Moscow and All Russia at the Patriarch of Alexandria and All Africa; and Mr. Sergey Alfyorov and Mr. Ilya Kashitsyn, DECR staff members. The Coptic Church was represented by Bishop Serapion of Los Angeles, co-chairman of the Commission; Rev. John Paul Abdelsayed, a cleric of the diocese of Los Angeles, Dean of St Athanasius and St Cyril Theological School; Rev. Boulos Halem, Director of Media Center and official spokesperson of the Coptic Patriarchate; Dr Isaac Agban, Secretary-General of the Coptic Institute of Higher Studies; and Mrs. Barbara Soliman, Director of the Office for Church Projects of the Coptic Patriarchate.

At its first meeting, the Commission set priority goals for developing in the nearest future cooperation between the Russian Orthodox Church and the Coptic Church in academic sphere, in theology, in exploring monastic traditions of the two Churches, in pilgrimage, in social ministry and church-state relations.

The participants in the meeting adopted a communiqué which states, in particular, that the two Churches have common views on the grievous situation of Christians in some Middle Eastern countries, first of all, in Iraq, Syria and Libya, call to put an end to persecutions on religious grounds, and express their support to the efforts aimed at preserving Christian presence in the region. At the same time Egypt, according to the document, has lately been an example of how interreligious peace may be preserved, thanks to sustained efforts made by President Abdel Fattah el–Sisi to combat extremism in its various manifestations. The participants in the dialogue extended condolences to the families of those who had died at the Russian plane crash over the Sinai on October 31, 2015.

On February 6, the Commission members met with His Holiness Coptic Patriarch Tawadros II. Bishop Gennady conveyed to the head of the Coptic Church greetings from His Holiness Patriarch Kirill of Moscow and All Russia, informed him of the progress in the bilateral dialogue and of the plans to implement some joint projects. As His Holiness Patriarch Tawadros noted, the steps to intensify relations between the Russian Orthodox Church and the Coptic Church are being made at a time when Christians combine their efforts to support their brothers and sisters suffering persecution for faith in some regions of the world. The Primate of the Coptic Church believes that the decision to arrange a meeting between His Holiness Patriarch Kirill of Moscow and All Russia and Pope Francis of Rome was one of important manifestations of this tendency. The participants in the meeting also emphasized that cooperation between the Coptic Church and the Russian Orthodox Church was an essential aspect of relationships between the Egyptian and the Russian people.

While in Cairo, members of the Russian Orthodox Church’s delegation visited St Nicholas Monastery of the Orthodox Church of Alexandria, where they met with Metropolitan Nikodemos of Memphis, Exarch of His Beatitude Patriarch Theodoros II of Alexandria and All Africa. Bishop Gennady asked Metropolitan Nikodemos to convey to His Beatitude Theodoros cordial greetings from His Holiness Patriarch Kirill and informed him of the progress in the dialogue with the Coptic Church.

Bishop Gennady also met with representatives of the Egyptian mass media and gave an interview to El-Balad news agency, in which he focused, among other things, on the problems of preventing and opposing extremism and terrorism.

On February 7, the representatives of the Russian Orthodox Church prayed at the Divine Liturgy in the Church of the Holy Great Martyr Demetrius of Thessaloniki, the Representation of the Patriarch of Moscow and All Russia at the Patriarch of Alexandria and All Africa. Later the same day the delegation left for Moscow.

The next session will take place in Astana, Republic of Kazakhstan, in summer 2017.