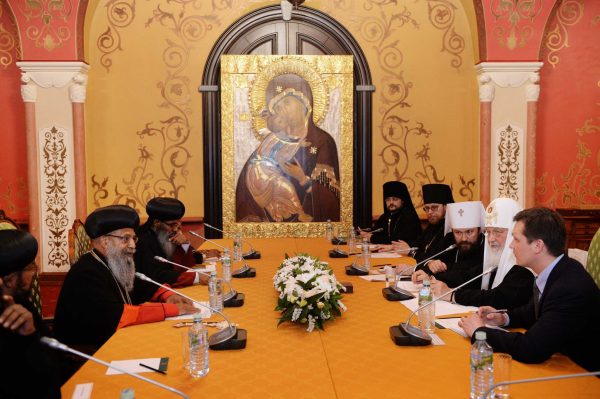 His Holiness Abune Mathias I, Patriarch and Catholicos of Ethiopia, visited the Russian Orthodox Church on 15-20 May 2018. During his visit, the Primate of the Ethiopian Church and the accompanying delegation were guests of the churches, monasteries and academic institutions of the Russian Orthodox Church and became acquainted with its experience in social ministry and in manufacturing ecclesiastical goods.

On 17 May 2018, the feast of the Ascension of the Lord, a meeting between His Holiness Patriarch Kirill of Moscow and All Russia and His Holiness Abune Mathias I, Patriarch and Catholicos of Ethiopia, took place at the Cathedral of Christ the Saviour in Moscow. Participating in the meeting on behalf of the Russian Orthodox Church were also Metropolitan Hilarion of Volokolamsk, chairman of the Department for External Church Relations (DECR); Archimandrite Philaret (Bulekov), DECR vice-chairman; Hieromonk Stephan (Igumnov), DECR secretary for inter-Christian relations; Hieromonk Ioann (Kopeykin), pro-rector of the Ss. Cyril and Methodius Theological Institute for Post-Graduate Studies; Mr. Vakhtang Kipshidze, vice-chairman of the Synodal Department for Church’s Relations with Society and Mass Media; and on behalf of the Ethiopian Church – His Grace Abune Enthons, Archbishop of West Harerge Diocese; His Grace Abune Philipos, Bishop of South Omo Diocese; His Grace Abune Aregawi, Bishop of South Gonder Diocese; Melake Genet Abba Kidane Mariam, P. A. to His Holiness Abune Mathias I; Melake Selam Abba Kiross Weldeab, Head of Media Service, EOTC; and Musie Hailu, Head of the Service of the Patriarchal Protocol.

Among the primary tasks requiring a solution His Holiness Patriarch Kirill and His Holiness Abune Mathias highlighted the continuing persecution of Christians in a number of countries in the Middle East and Africa. Christians often become hostages to the clashes and contradictions between sides in political conflicts, including those which concern the relationships between the world’s leading powers.

The heads of the Russian Orthodox Church and the Ethiopian Church noted the special importance of the joint peacemaking initiatives already undertaken by Christian leaders and the relevance of further appeals to the warring sides to enter into a peaceful and constructive dialogue. The Primates of the two Churches stressed that the way to resolve the existing problems lies in reviving the principles of cooperation and trust on the inter-state level, through intensifying inter-religious contacts and through asserting the principle of love and compassion towards one’s neighbour as the foundation of inter-personal relationships.

The Primates expressed their deep concern at the rapid growth of secular processes in modern-day society and noted the importance of defending through joint efforts the Christian understanding of morality and the institute of marriage and family.

Proceeding from the results of the meeting, His Holiness Patriarch Kirill and His Holiness Abune Mathias agreed to develop bilateral cooperation in a number of areas such as:

In order to develop systematic interaction, the decision was taken to present to the attention of the Holy Synods of both Churches the proposal to set up a Bilateral Commission for Dialogue between the Russian Orthodox Church and the Ethiopian Church.