Complex aid center for homeless to appear in Moscow 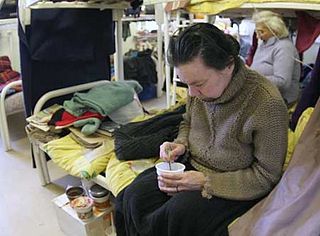 The Moscow authorities have promised the Church of Sts. Cosmas and Damian in Shubino to hand over a piece of land near the “Kurskaya” metro station for location of a complex aid center for homeless people, reports Interfax.

At the corner of the Kostomarovskaya Embankment and the Kostomarovsky Lane, far from apartment houses, it is supposed to arrange not only a dining-room for homeless, but also a portable shower cabin and a hostel where they will be able to find temporary shelter while Church social workers will be restoring their documents and fixing them up in state centers of social adaptation.

The land will be given for free use. Negotiations with the Moscow City Property Department are currently being held. It is expected that all formalities will be settled within haf a year.

For over 15 years now, the Orthodox community has given food to about 400 homeless several times a week in the Church of Sts. Cosmas and Damian which is situated in front of the Moscow Mayor’s Office near the Tverskaya Street. In 2012, the prefecture of the Central Administrative District of Moscow addressed the rector of the Church with a request to consider a question of giving food to homeless in another location.

There are currently five Orthodox organizations in Moscow which not only provide those in need with food but also find their relatives, book tickets to their homeland, help with restoring their documents and finding jobs, and get them in social and medical institutions. Two support church mobile services for homeless also run in Moscow.