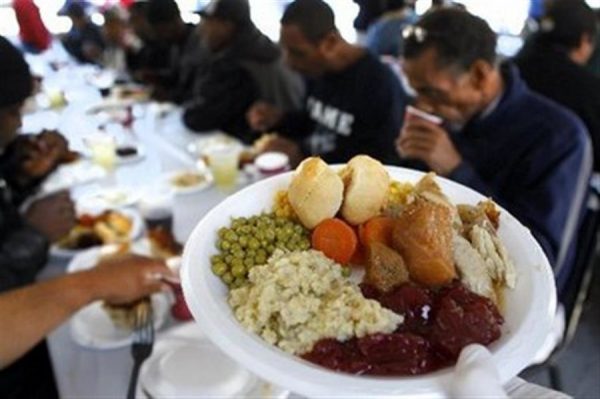 Imagine dining with a homeless person and hearing the story of how they wound up on the street. Could anything in their tale make you picture yourself in their shoes, if circumstances of your own life had been different?

And if you heard of bad choices, what if these were influenced by generational dysfunction you were never exposed to?

Of all the components of Lent, one that’s become essential to me isn’t found in liturgical manuals, but in writings of the Church fathers. A fourth-century bishop, St. John “the Golden-Mouthed,” taught that money saved from not buying meat should be used to feed the widow, the orphan and the poor. This is something my parishioners try to do each Lent by serving a week of dinners at a local homeless shelter.

A highlight of this time comes after the line dies down, when we take off our gloves and sit to eat with the men we’ve come to feed. I was nervous about this at first, on account of past experiences with panhandlers who may have been mentally ill and/or on drugs. But some positive experiences at Pueblo’s Wayside Cross broke me in.

Now I treasure the opportunity at my local ministry to encounter “the homeless” not as a faceless mass, but as unique persons with real stories and hopes. I’d feel like a voyeur were I to pry into their lives, but over the years some have opened up eagerly.

That’s how I met “Tony.” The death of his girlfriend, job loss and a cancer diagnosis all propelled him to a short-term psychiatric commitment. When he got out, he no longer had a place to go. Now he’s working and putting away enough that he hopes to be back in housing soon.

It’s how I met “Steve,” who grew up living in a car with homeless parents, until he ran away to San Francisco. There, he was sexually preyed upon by older men who got him drug addicted. But he broke free and took a bus “anywhere else.” Now he’s in a program that covers his community college tuition, and hopes to do something with computers.

It’s how I met “Ahmed,” who apologized for all the horrible things “his people” had done to mine. I had no idea what he meant, until he explained that his parents brought him from Turkey as a boy, and he knew what Turks had done to Greeks and Armenians. I replied that he wasn’t responsible, and I’m German-Irish. But I never would’ve imagined this heartfelt encounter, which I’ll never forget.

Nor will my parishioners forget theirs. As one teen said on the last night of our week, “We’ve been doing this so long, I can’t imagine Lent without it.”

I’m thankful for the modest opportunity to challenge stigmas and judgments, and to encounter the homeless “other” as a neighbor in need, who is Christ for me.