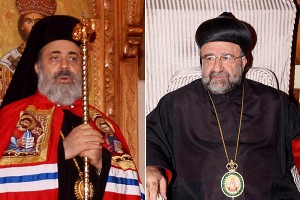 BEIRUT: Concern is mounting over the fate of two Syrian bishops reportedly kidnapped in the north of Syria, with another Church official contradicting an earlier report that the pair had been released.

Aleppo’s Greek Orthodox archdiocese said it had no news of the clergymen’s whereabouts.

“We have no new information,” Ghassan Ward, a priest at the archdiocese, told AFP. “We can say that (as far as we know) they haven’t been freed,” he added.

Late Tuesday a senior Syrian Church figure said the pair were returning to the patriarchate in Aleppo. However, by the evening there was no evidence they had reached the city.

Later Tuesday, John Yazigi, the patriarch of the Greek Orthodox Church in the Levant and a brother of one of the captives, who told his colleague Metropolitan Philip of North America that the archbishops were still being held.

“These release of these hierarchs has not taken place,” he said, according to a statement on Philip’s website.

The contradictory information from Church institutions on the bishops’ fate sheds light on the challenges the institution has faced during Syria’s 2-year civil war. The Church has traditionally been supportive of Bashar Assad’s regime with some Christians fearing rebel forces may bring about an Islamist state in Syria if they are successful in ousting the regime.

Ibrahim articulated some anti-regime sentiment in an interview with the BBC two weeks ago, where he said the death toll in the war was 100,000, higher than the official U.N. figure of 70,000, prompting some to suggest the regime was involved in his disappearance.

He condemned the press for “not conveying the true image of what’s going on the ground,” and blamed “the regime for not treating the crisis in a better way.”

The opposition Syrian National Council speculated that Ibrahim’s comment’s sparked his and Yazigi’s kidnap by the regime.

Questions of who was responsible for the clergymen’s capture were remained unclear Wednesday.

The opposition-aligned Syrian Observatory for Human Rights said that the kidnapper had “foreign accents” and “spoke classical Arabic,” appearing to corroborate regime reports Tuesday that the hostage-takers were Chechens.

However, despite regime reports of the captors’ nationality, it was unclear if government officials were in communication with the kidnappers.

Speaking to an audience of around 100,000 at the Vatican Wednesday, Pope Francis said there were “contradictory reports” about the fate of the bishops and asked that “they be returned quickly to their communities”.

Violence Wednesday was also creeping toward Assad’s heartlands in the capital, as reports emerged of a car bomb killing a senior civil servant.

Mohamed Abdel Wahab Hassan, of the Electricity Ministry, died when a magnetic bomb attached to his car detonated in the central Damascus neighborhood of Baramke, SANA reported.

The Observatory confirmed the official’s death and said two people in the car were injured in the attack.

Car bombs are on the rise across the country, a report by the Human Rights Violations Documentation Center said earlier this week.

In the suburbs to the south of the city, regime airstrikes pounded several neighborhoods as part of a concerted attempt over the past two weeks to force rebels out of their strongholds in the outskirts of the capital.

In Aleppo province, rebels were battling regime troops for control of Minnigh military base for the first time, the Observatory said.

“The rebels, who have laid siege to the airport for months now, entered it for the first time around dawn,” Observatory director Rami Abdel Rahman told AFP.

The rebels Tuesday took a key military position outside the airport, in Aleppo province, which allowed them to launch a raid on the facility.

As of mid-afternoon 20 had been killed across the country, the LCC reported. –With agencies