Construction of Orthodox chapel of St. Olaf begins in Norway

Source: DECR
Natalya Mihailova | 23 July 2014
On 16 July 2014, the foundation of the Orthodox chapel of St. Olaf, King of Norway, was laid in Stiklestad (100 km from Trondheim). The chapel is being built at the site of the death of “Norway’s Eternal King”. St. Olaf, the heavenly patron of Norway, died in 1030. 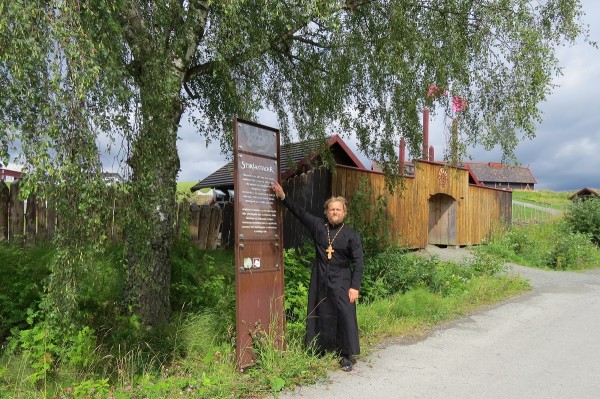 Archbishop Mark of Yegorievsk, head of the Moscow Patriarchate’s Administration for Institutions Abroad, blessed the foundation stone and the site in the territory of the Stiklestad National Culture Centre on 28 July 2013, the day of the celebration of the Baptism of Russia and the eve of the commemoration day of St. Olaf the Passion-Bearer. The church itself was consecrated in Folldal by Bishop Hilarion (Alfeev), now Metropolitan of Volokolamsk, chairman of the Moscow Patriarchate’s Department for External Church Relations.

It is planned to complete the construction of the chapel by the end of August. This year marks the millennium of the baptism of St. Olaf in Rouen, France. To commemorate this memorable date, the assembly of the Orthodox clergymen will celebrate the Divine Liturgy and a thanksgiving at the Orthodox chapel in Stiklestad on October 16.