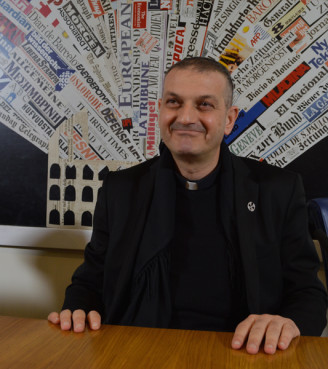 A Syrian priest who escaped to the West after being held for months by Islamic State believes his life was spared because of his interfaith work.

Syriac Catholic priest Rev Jacques Mourad was abducted from the Mar Moussa monastery. He believed he was going to be killed, but was instead held captive in the terrorist group’s capital, Raqqa.

According to RNS, he told members of Rome’s Foreign Press Association: “During these 84 days that I was a prisoner in this bathroom in Raqqa, it could be said that it was one of the most difficult experiences that a person can go through; that of losing one’s liberty. For me it was also a very intense experience, from the spiritual point of view.”

He said that there were very dark moments when he was threatened with execution. “It was very difficult above all when they said, ‘Become Muslim or we’ll cut your head off,'” he said.

Mourad said he thought his work fostering interfaith dialogue at the monastery had saved his life. “I’m convinced I’m alive also thanks to this mission…the work we did contributed to preventing Islamic State from killing me,” he said.

He was moved in August to another location where he found 250 Christians who had been abducted from his parish in Al-Qaryatayn. “I saw a young boy from my parish; it was a very touching moment. As soon as I turned I suddenly saw all the 250 kidnapped Christians — the children, old people, disabled, women — it was a very hard moment for me.”

They were allowed to return to their homes the following month on payment of a punitive tax. However, Mourad said that he decided to escape because life had become “unbearable”.

“Life had become unsustainable. We had nothing — we didn’t have electricity, there was no food, water — it was difficult because it was also very dangerous. At the same time I felt a responsibility towards the Christians,” he said. Others had been able to flee the area, but he said that eight had been killed.

Mourad urged Western nations to welcome refugees from Syria. “We are responsible for the whole Syrian population, not only Christians,” he said.

“Europeans must accept their responsibility towards Syrians — towards so many Syrians who flee in search of a better life and die in the sea.”

Mourad’s case highlights the plight of Christians in areas controlled by Islamic State. A letter from senior Church leaders and academics has urged US Secretary of State John Kerry to recognise the actions of IS toward Christians as constituting genocide. It notes that a judgment that it is committing genocide against the Yazidis is expected.

Signed by senior figures from Armenian, Chaldean, Maronite and Orthodox Churches as well as evangelical representatives such as Albert Mohler and Russell Moore, the letter says: “The Genocide Convention defines genocide as killing and certain other acts ‘committed with intent to destroy, in whole or in part, a national, ethnical, racial or religious group’. We have extensive files supporting a finding that ISIS’ treatment of Iraqi and Syrian Christians, as well as Yazidis and other vulnerable minorities, meets this definition.”

The letter says: “The United States is rightly viewed the world’s leading defender of vulnerable minorities, and as an historic safe-haven for those fleeing religious persecution. A declaration of genocide by the State Department is thus a unique opportunity to bring America’s religious communities together to pursue the truth, to support the victims, and to bear witness to the noble principle of ‘Never Again’.”