Coptic Church Pope arrives in the UAE on five-day visit

Source: The National
Natalya Mihailova | 10 May 2014
ABU DHABI // The Coptic Pope arrived in the UAE on Friday night – and his first port of call was the Sheikh Zayed Grand Mosque. 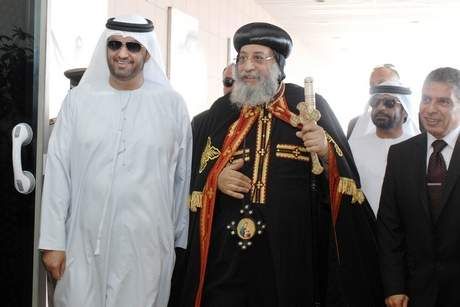 Pope Tawadros II is the leader of the Coptic Orthodox Church of Alexandria, which has more than 12 million members worldwide, most of whom are in Egypt.

The Pope, whose trip ends on Wednesday, will give a sermon at St Antony Coptic Orthadox Church, in Al Mushrif, on Saturday morning before heading to Al Raha Beach, where he will deliver a lecture and meet senior UAE officials. He heads a mass on Sunday and later he will visit Dubai and Sharjah.

He was met on his arrival in the capital by Dr Sultan bin Ahmed Sultan Al Jaber, Minister of State, Mohammed bin Nakhaira Al Dhahiri, UAE Ambassador to Egypt, Ehab Imam Hammoda, the Egyptian ambassador to the UAE, and other senior officials.

The Pope praised the President, Sheikh Khalifa, and said his visit reflected the love and warmth between the UAE and Egypt. He added that Egypt and its people appreciate the strong support shown by UAE leaders and its people during its ongoing political crisis.

Most viewed articles
A Great Time to Join the Orthodox Church356
First Church in the Antiochian Archdiocese Named for St. Xenia of St. Petersburg Prepares for Feast Day272
Patriarch Kirill: Not Only People, But Churches Too, Can Depart from God139
My World’s Different104
Brooklyn Street Co-Named for Antiochian Pastor Who Served a Half Century There93
Metropolitan Hilarion: the Church and traditional confessions have done everything possible to improve the situation in Kazakhstan86
Patriarch Porfirije of the Serbia: Our Position on the Church Issue in Ukraine Has Not Changed80
Thoughts on Theophany and Revelation70
4-400×6001
1
Most popular authors
Pravmir.com team577
Frederica Matthewes-Green356
Protopresbyter Themistoklis Mourtzanos104
Peter Samore93
Elissa Bjeletich70