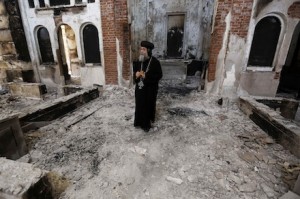 The Coptic Orthodox Church has condemned the killing of seven Egyptian Christians in neighbouring Libya.

“We demand the arrest of the terrorist elements behind this painful attack,” the Church said in a statement released yesterday.

“We pray that God will protect the Egyptian people from brutal terrorism,” it said, according to Egypt’s state-run newspaper, Al-Ahram.

Egypt’s other local media, meanwhile, displayed gruesome photos of the seven dead, who were reportedly shot by armed militants in eastern Libya. The Egyptians were found with their hands tied behind their backs and bullet holes in their heads, local news media reported, adding that the men’s bodies were scheduled to be flown back to Egypt.

Egypt’s online edition of al-Youm al-Sabea newspaper reported that the seven “Christian Egyptian nationals … were killed at the hands of one of the armed Libyan militias.”

The paper suggested the killings were politically motivated and aimed at putting pressure on Libya’s government and army, which it said were at odds to assert control, three years after a revolution that ousted dictator Moammar Gadhafi.

Hours earlier, an Egyptian Foreign Ministry spokesman said the killings had taken place late on Sunday in a village on the outskirts of Benghazi, in eastern Libya.

A group of masked men raided the first floor of the building in which the Egyptians lived and dragged them away, the spokesman, Badr Abdel-Aty, said in a statement posted on the official website of Egypt’s Foreign Ministry.

Abdel-Aty said he was relying on information from an eighth Egyptian who had managed to escape the raid. He said he was expecting the Libyan authorities to “conduct a swift and thorough investigation” into this “horrible crime.”

Local residents and an Egyptian worker in Libya told the British news agency Reuters that the unknown gunmen had gone door to door in the building where the Egyptians lived, asking if residents were Christian or Muslim before taking the seven Egyptian Christians away.

No group has claimed responsibility for the slayings.

In January, gunmen in Libya abducted five Egyptian diplomats and held them for several hours in retaliation for the arrest of a top Islamic militia commander in Egypt.

The majority of Egypt’s estimated 90 million people are Muslim. Christians make up about 10 per cent of the population.