Source: Ahram Online
Natalya Mihailova | 14 April 2017
The Coptic Orthodox Church has cancelled the reception of condolences from public figures at Easter services on Sunday, Pope Tawadros announced today during his sermon as he led the Good Friday mass at Cairo's St Mark's Cathedral. 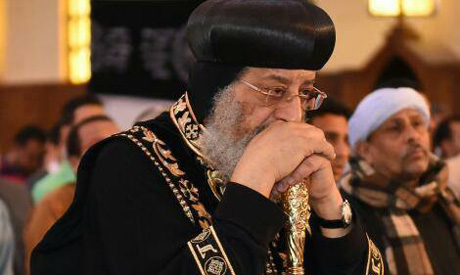 Christians are set to celebrate Easter in churches across the country this week a week after deadly suicide bombings hit St George’s church in Tanta and St Mark’s cathedral in Alexandria on Palm Sunday, killing at least 46 people.

The head of the church rather recommended that public figures visit “the injured and the martyrs’ families”, so as not to mix feelings of condolences with felicitations.

The bombings constitute the worst combined terrorist attack in history against the country’s Christian population. The Islamic State militant group has claimed responsibility.

On Tuesday, the secretary of the Holy Synod of the Coptic Orthodox Church, Bishop Rafael, announced the cancellation of Easter celebrations across the country and the limiting of Saturday night masses to prayer services, with a reception for mourners on Sunday.

Coptic Orthodox worshippers begin their Easter Vigil on Holy Saturday, which falls this year on 15 April, and break it at dawn on Easter Sunday to celebrate the Resurrection.

Egyptian authorities have identified the two suicide bombers and the terrorist cells responsible for the deadly attacks.

Cairo imposed a nationwide three-month state of emergency after the attacks.

Copts make up about 10 percent of Egypt’s population of 90 million and constitute the Middle East’s largest Christian community.