Source: Ahram Online
Natalya Mihailova | 28 May 2016
Soad Thabet, who was stripped naked by an angry mob in a sectarian attack in Minya last week, says that she forgives her attackers 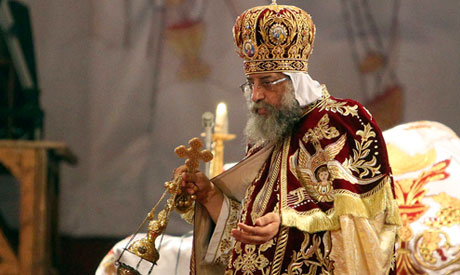 Egypt’s Pope Tawadros II, the head of the Coptic Orthodox Church, announced on Friday that Bishop Macarius of Minya and Abu Qirqas was delegated to speak on behalf of the church in relation to a recent sectarian mob incident in the governorate.

The Pope added in a short statement issued Friday afternoon that he had not delegated anyone else to speak on the church’s behalf on the matter.

Last week, a Muslim mob attacked Christian houses in the village of Al-Karama in Minya, the bishopric said in a statement. An elderly Christian woman, whose son was believed to be in a relationship with a Muslim woman, was attacked by the mob and stripped naked in the street.

In a video testimony released by the bishopric, the woman gave her testimony.

“My name is Soad Thabet and I do not want anyone to interview me or give me help,” she said.

“I forgave them, God forgive them,” she said about her attackers.

Security forces have arrested 11 people involved in the attack against her as well other Christians in the village.

Thabet thanked President Abdel-Fattah El-Sisi, Pope Tawadros II and Bishop Macarius, and said she was not currently in Minya governorate.

On Thursday, President El-Sisi called for the arrest of those involved in the mob attack and urged the government to take “necessary measures to preserve public order, protect (citizens) and property within the rule of law.”