Cross of Clouds Appears in the Sky Above Mariupol, Ukraine

Source: Pravmir.ru
Natalya Mihailova | 30 October 2014
October 28, 2014. A set of unusual pictures has been offered to the “Workers By The Sea” city newspaper in Mariupol, Ukraine. A local resident spotted a unique occurrence: a cross made of clouds appeared in the sky above the city. 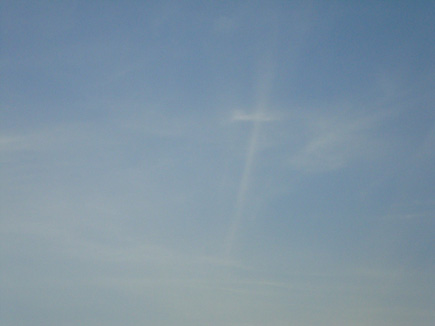 The “Orthodoxy in Ukraine” website has reported that the newspaper stated that Roman Karlov, a local resident – a builder and designer, who is currently working on the restoration of the St. Nicholas Cathedral in Mariupol – brought the pictures to the editorial office.

“Clergymen of the church and I were examining the pictures,” Archpriest Nikolai Markovsky, Rural Dean of the Nikolaevsk-on-Amur district, commented on the appearance of the glowing Cross. “The Cross is correct, Orthodox. In the picture you can see that it looks like the Cross descends from the skies and blesses the city of Mariupol. In my memory, nothing of the kind has ever happened during my ministry.

“Apparently hearing the prayers of the Holy Church, the Lord Himself enters our life in order to comfort us in these troubled and difficult times, blessing our city with His radiant Cross,” Fr. Nikolai concluded.