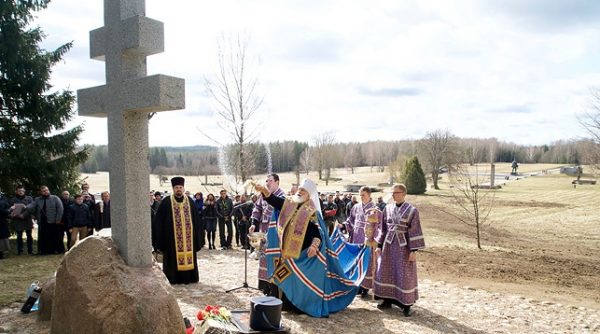 The benediction ceremony was led by Metropolitan of Minsk and Zaslavl Pavel and Auxiliary Bishop of the Minsk-Mogilev Eparchy Yuri Kosobudsky. Personnel of the memorial complex and those, who had helped erect the cross, took part in the prayer.

There is a crown of thorns at the top of the cross and three rocks at its foundation. The memorial cross has been designed by the architect Yuri Gradov and the sculptor Konstantin Selikhanov.

The Nazi troops burned the village of Khatyn together with its residents on 22 March 1943. A memorial complex was erected at the site after the war in memory of Khatyn residents and residents of all the other destroyed Belarusian villages.

Most viewed articles
First Church in the Antiochian Archdiocese Named for St. Xenia of St. Petersburg Prepares for Feast Day284
Patriarch Kirill: Not Only People, But Churches Too, Can Depart from God165
My World’s Different104
Patriarch Porfirije of the Serbia: Our Position on the Church Issue in Ukraine Has Not Changed89
Brooklyn Street Co-Named for Antiochian Pastor Who Served a Half Century There85
Thoughts on Theophany and Revelation77
A Christianity of the Catacombs72
Metropolitan Hilarion: the Church and traditional confessions have done everything possible to improve the situation in Kazakhstan68
Archbishop Makarios of Australia: ” the Great privilege of the Orthodox Church is that we live in communion”21
4-400×6001
Most popular authors
Pravmir.com team627
Protopresbyter Themistoklis Mourtzanos104
Peter Samore85
Elissa Bjeletich77
Archpriest Lawrence Farley72