Source: DECR
Natalya Mihailova | 09 May 2015
On 6 May 2015, the dedication day of the Monastery of St. George in Gotschendorf, Germany, Archbishop Feofan of Berlin and Germany officiated at the Divine Liturgy in concelebration with Archbishop Alexander of Baku and Azerbaijan. 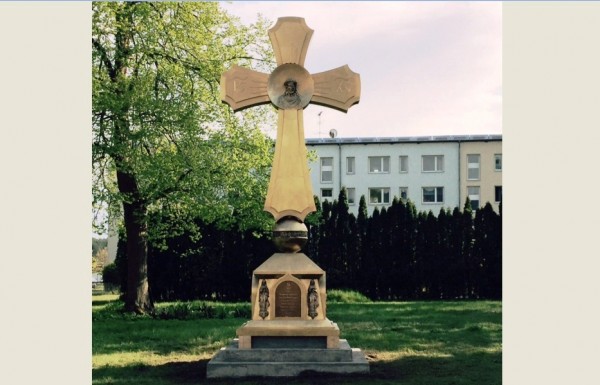 This was the first Liturgy celebrated in the Church of St. George the Victorious which is being constructed in the territory of the Monastery. Over one hundred guests from different countries have arrived to attend the feast day. The Office of the Blessing of Bells was celebrated after the Liturgy.

That same day a cross was erected in commemoration of the 70th anniversary of the Great Victory. The bronze cross, which weights two tons and is five meters high, was made on donations in Rostov-on-Don in Russia and brought to the monastery in Gotschendorf founded in 2006 in the territory of the estate which housed a residence of the Nazi Reich Marshall Hermann Göring during WW2. It is remarkable that the memorial cross was blessed on the eve of the 70th anniversary of the victory over fascism in Germany. The cross will be a monument to soldiers-liberators and a sign of reconciliation among nations.

Most viewed articles
A Great Time to Join the Orthodox Church226
New Jersey Governor Signs Bill Legalizing Abortion Up To Moment of Birth87
The Way of Christ Is The Way of Love76
Metropolitan Hilarion: the Church and traditional confessions have done everything possible to improve the situation in Kazakhstan67
Brooklyn Street Co-Named for Antiochian Pastor Who Served a Half Century There62
First Church in the Antiochian Archdiocese Named for St. Xenia of St. Petersburg Prepares for Feast Day58
My World’s Different48
Patriarch Porfirije of the Serbia: Our Position on the Church Issue in Ukraine Has Not Changed18
4-400×6001
The Apostles’ Fast and Theology1
Most popular authors
Frederica Matthewes-Green226
Pravmir.com team143
Ryan Foley87
Fr. Theodore Stylianopoulos76
Peter Samore62
Protopresbyter Themistoklis Mourtzanos48