Cross My Heart-Hope to Die

The Great Khan of China said to the Jesuit priest that he found it to be very strange that people of the West took an instrument of torture and made it into the chief symbol of their Faith.

The Cross of Christ has always been a mystery to many and a scandal to others. In former days, I use to think that the Cross of Christ was just something upon which we hung our sins so that we wouldn’t have to suffer for them later. That was a rather shallow view of it. Jesus made it more -he said that we would have to deny ourselves, pick up a cross and follow him. I realized that the Cross that stood on Calvary had to move from Calvary into my heart. Well, that has been a struggle because while my heart wants to live forever and is grateful for all the Jesus did for me, the heart also wants to pursue its own pleasures, dreams, and ambitions. To have the Cross in my heart and the self-denial that follows is directly opposed to those hopes, dreams, ambitions, desires and fantasies. For this reason, though sin is hard to bear, the Cross is very hard to bear. After all, it is an instrument of death and so it compels me to die to myself. Frankly, that’s the last thing my self wants to happen. 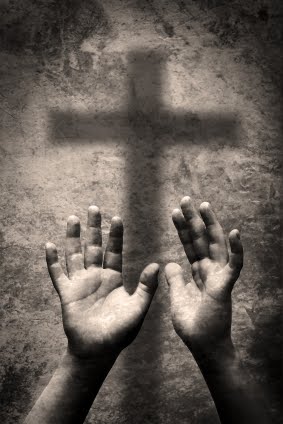 The Fathers have much to say about what it means to have the Cross in the heart. One example is my mental life. My mind is rather unruly and undisciplined. I let thoughts and fantasies roll in and out of it with little resistance. As a result, negative and judgmental thoughts pop up. Human nature being what it is, I can let those negative thoughts develop until I find myself in a depression. How would the presence of the Cross challenge this? St. Paul said, “Finally, brethren, whatsoever things are true, whatsoever things are honest, whatsoever things are just, whatsoever things are pure, whatsoever things are lovely, whatsoever things are of good report; if there be any virtue, and if there be any praise, think on these things.” (Philippians 4.8) Now, having been in Cognitive Therapy in the past, it seems to me that St. Paul was the first Christian Cognitive Therapist. The point is that my self denial means that by the grace of the Cross, I have to turn from thinking about whatsoever is dishonest, unjust, impure, ugly, of bad report. For me, that became an act of self-denial. For so many years, I had negative thoughts drilled into me until I came to believe that this was my true self. I thought that to think of good things was “Pollyanna,” and totally out of touch with reality. I repeated the negative voices until I began to believe them and depression was my constant friend. God, in His mercy, began to show me that this was not my true self, but that I also had to mentally turn from what had become the mental habits of my life. Therapy certainly helped, but it was Orthodoxy that gave me the key to begin crucifying my mental self.

Other examples abound. The Cross can challenge how I eat, how I entertain myself, how I spend my time, and so on. There is no aspect of my life that the Cross will not challenge. One thing still bothers me. I think on all the things that are good, yet I am constantly faced with the fact that there is sin in my life and even after all this time, I can’t seem to get rid of it. This is certainly a place for the negative voices to condemn me, so what can I do?

“In the name of the Father, of the Son and of the Holy Ghost.

So often we ask ourselves and one another a very tormenting question: How can I deal with my sinful condition? What can I do? I cannot avoid committing sins, Christ alone is sinless. I cannot, for lack of determination, or courage, or ability truly repent when I do commit a sin, or in general, of my sinful condition. What is left to me? I am tormented, I fight like one drowning, and I see no solution.

Let us therefore accept the pain as a redeeming pain, even if we cannot offer it as pain pure of stain. Amen.” (http://www.metropolit-anthony.orc.ru/eng/eng_95.htm)

What a remarkable passage. It gives a poor old sinner like me great hope because it reminds me of the unfathomable depths of the mercy of God. It is to that mercy that I place my trust. It also shows me the power of the Cross of Christ.

Christ bore more on the Cross that we will ever realize. If we bring the Cross into the heart, then maybe, someday, we will be able to say with St. Paul, “I am crucified with Christ: nevertheless I live; yet not I, but Christ lives in me: and the life which I now live in the flesh I live by the faith of the Son of God, who loved me, and gave himself for me.” (Galatians 2.20)