Source: Interfax-religion
Natalya Mihailova | 07 April 2014
Moscow, April 7, Interfax - Members of the Association of Heroes of the Soviet Union and Heroes of Russia, polar researchers, statesmen, public figures and businessmen arrived at the North Pole on Sunday. 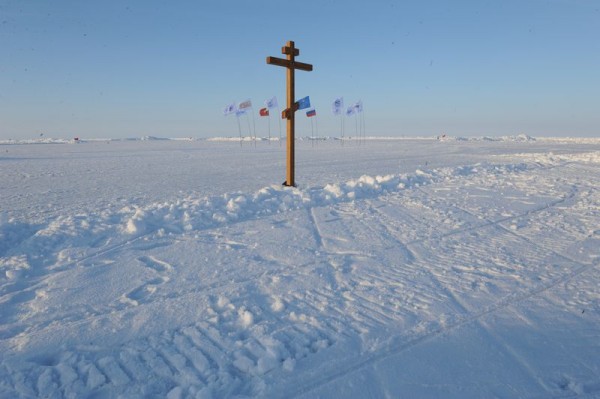 The group also includes Bishop Iakov of Naryan-Mar and Mezensk, and Archpriest Vsevolod Chaplin, chairman of the Moscow Patriarchate’s Department for Church and Society Relations.

A memorial cross was set in the North Pole and Bishop Iakov said a prayer, Father Vsevolod told an Interfax-Religion correspondent.

The Heroes of Russia and the Soviet Union’s appeal to nations was read out.

“Condemn wars, all manifestations of fascism and terrorism, drugs and killers of Nature before it is too late! Be tolerant to each other, and vigilant, as well! Save the world and our common home – the Earth, the blessed gift of God, especially the Arctic and Antarctic which are tender as Mother, fragile as ice, strict as Father, and not all-forgiving. Irreversible natural processes may come into motion and uncontrollable social, political, inter-ethnic and inter-faith contradictions may arise and lead us to a universal catastrophe. God save us all!” the appeal says.