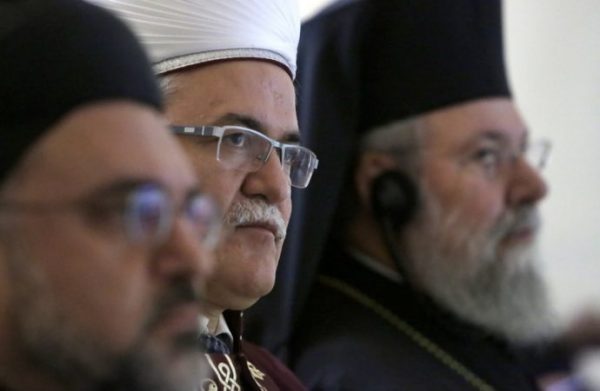 Stating that men and women are equal in the eyes of God, the leaders said Christianity and Islam condemn violence against women and that it is their religious duty to stand united against it. They also rejected the “misuse of religion to vindicate” such violence.

They expressed concern that violence continues to be “one of the most pervasive manifestations of discrimination” against women in Cyprus.

Researchers said almost one in three women have experienced some form of violence since the age of 15.

“It is our responsibility not only to condemn violence in statements, but to ensure that we live by what we’ve signed here today,” said Armenian Orthodox Archbishop Khoren Toghramadjian.

Mufti Talip Atalay, the Muslim leader in the island’s breakaway Turkish Cypriot north, said beyond pronouncements, religious leaders need to take concrete steps in hopes that at their next gathering they can’t point to a genuine improvement in helping to end violence against women.

Archbishop Chrysostomos, head of Cyprus’s Greek Orthodox Church, said it’s imperative for everyone to support women because they are “the most perfect image of God.”

Researchers Mine Atlil and Susana Elisa Pavlou said almost one in three women on both sides of the divide have experienced some form of violence.