Cyprus: Together, Muslim and Orthodox Christians Start Restoring Monuments, Churches and Mosques in Act of Peace

Source: Greek Reporter
Natalya Mihailova | 04 August 2016
In Cyprus, Muslim and Orthodox Christian authorities have taken the initiative to start a joint restoration project to save places of worship, culture and history. 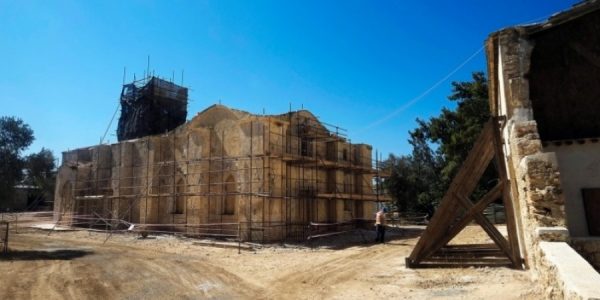 The efforts have been made independently from the EU, and are expected to cost some 6 million euros.

Over 40 sites have been identified as being in need of restoration, and at risk of collapsing, or being destroyed and lost for future generations.

After the first 40 sites, authorities have identified an additional 80, including monasteries, mosques and Orthodox churches.

The island has been divided since the illegal Turkish military occupation in 1974. Until this day the Turkish forces occupy the northern third of the island, accounting for almost 40 percent of the total island.

During the occupation of Cyprus many structures were intentionally destroyed by the Turkish military.

In the occupied Turkish sector, Orthodox churches were destroyed or turned into mosques, while others have been left to become derelict and abandoned structures with graffiti covering iconic Greek figures.

The Greek-Cypriot sector has already seen to the restoration of four mosques, and Ottoman watermill and a heated bathhouse.

Archaeologists and engineers are working together to plan the restoration efforts that will be needed to undertake various challenging elements on Cyprus, including erosion, water damage and occupiers’ whitewashing of medieval frescos in places of worship and cultural significance.

The initial phase of work was completed with the help of 725,000 euros from EU funds, and the restoration project hopes to continue to accomplish rebuilding the damaged icons of history on Cyprus in a joint effort to restore and rebuild the friendship between the two communities existing on the island.