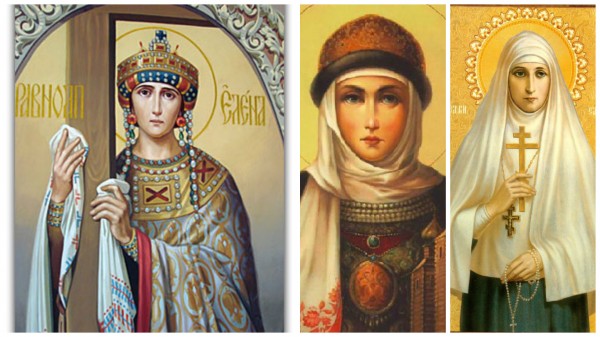 A famous saint in the family? How about a holy and righteous Orthodox sovereign as a relative? For those of northern European or Celtic ancestry, the possibility does not require a stretch of the imagination, or the fabrication of myths. The family trees of three daughters of the Orthodox west are as clear as their images on church icons.

Earliest Church Tradition tells us of the early life of Saint Helen, mother of saint Constantine the Great, first Emperor of Christian Rome. Saint Helen was a Celt, born at Colchester, who traveled to Byzantium to join the court of the emperor whom she would marry. Her later travels to the Holy Land, and her finding the relics of the True Cross are well known. What is less known is the extent to which she had to fight for the recognition of her son as heir to the Empire, and her baptism in her Celtic homeland which fed her son Constantine on the milk of Christ from his earliest years – a faith which blossomed in his adulthood to encompass his entire empire.

It was the Viking lands of Norway that produced a second Orthodox sovereign, in the holy personage of Saint Helga, who came to be known as Olga among the Slavic people with whom she made her home. Grandmother of the Orthodox prince, Saint Vladimir, her efforts to Christianize Vladimir’s father were unsuccessful, yet her holy prayers proved effective. It was years later that the barbarous pagan Vladimir sought a religion to unite the people of Rus (a name drawn from a Viking tribe), and found it through his emissaries to Constantinople, in the Orthodox Christianity of his grandmother, Saint Helga (Olga).

Nearly one thousand years later, a prince of the same Russian land married the German Lutheran princess who would come to be known as Saint Elizabeth Romanov. A convert to the Orthodox Church (a rare practice for nobility, who were never compelled to convert in order to marry), Saint Elizabeth endured the death of her husband, and service as a nurse on the front lines of the Orthodox Empire during war time. After taking monastic vows, the nun Elizabeth was captured by the invading communists, who eventually martyred the saint by throwing her down a well. Her incorrupt and miracle-working relics were later enshrined in the Russian Church in the Holy City of Jerusalem, not far from the place where her sister in Christ, Saint Helen, once found the True Cross.

Faithful Orthodox – especially Canadian young women with roots in Celtic, Scandinavian, and German lands – can look to these holy women as intercessors, as princesses in the true and Eternal Kingdom, who share the blood of all Orthodox Christians, through Holy Communion.