Deacon Alexy Dikarev: The Declaration of Pope Francis and Patriarch Bartholomew is an Important Step in the Orthodox-Catholic Dialogue

The parties recognize the importance of continuing to work together within the framework of the Joint Commission for Theological Dialogue.
Deacon Alexy Dikarev | 30 May 2014
May 27, 2014. Pravmir. On the evening of May 25, 2014, on the premises of the Apostolic Delegates in Jerusalem, Patriarch Bartholomew I and Pope Francis signed a joint declaration during a private meeting. 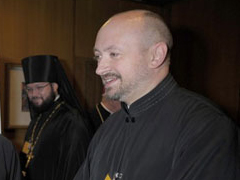 Deacon Alexy Dikarev, a member of the DECR secretariat for inter-Christian relations, told Pravmir why this meeting took place in the Holy Land and whether Pope Francis and Patriarch Bartholomew have attained full unity.

“During the enthronement of Pope Francis, it was agreed upon with Patriarch Bartholomew to hold a meeting in Jerusalem to celebrate the 50th anniversary of the first meeting of Pope Paul VI and Patriarch Athenagoras, which took place in Jerusalem in 1964.

“The declaration begins with an acknowledgment of the importance of the historical fact of the first meeting, which gave birth to Orthodox-Catholic dialogue.

“Moreover, it highlights the important role of the Joint International Commission for Theological Dialogue between the Roman Catholic and Orthodox Churches, which has operated since 1979. The main purpose of its work is reaching a broad consensus on issues of doctrine – and, therefore, the achievement of Eucharistic unity between the Churches – but they recognize that this goal is far from being achieved.

“The parties recognize the importance of continuing to work together within the framework of the Joint Commission for Theological Dialogue.

“Not having been able to attain unity, the Churches can, however, already now collaborate on many pressing issues of our time: the protection of the traditional family, human dignity, human life from birth to death, the struggle for peace, social justice, and cleaning up environmental damage.

“The Heads of the Churches expressed their concern for the conflict in the Middle East and especially the situation of Christians in Egypt, Syria, and Iraq, and called for reconciliation and conflict resolution. Christians are also encouraged to engage in dialogue with Judaism, Islam, and other religions.”

Most viewed articles
Patriarch Kirill: Not Only People, But Churches Too, Can Depart from God208
A Christianity of the Catacombs168
Thoughts on Theophany and Revelation98
Patriarch Porfirije of the Serbia: Our Position on the Church Issue in Ukraine Has Not Changed81
The Truth About Riches65
Archbishop Makarios of Australia: ” the Great privilege of the Orthodox Church is that we live in communion”64
Metropolitan Onuphry Speaks on How to Protect One’s Soul From Sin25
Most millennials, Gen Z adults support bans on abortions when baby’s heartbeat is detected: poll7
How to live the Spiritual Life (Part I)1
Most popular authors
Pravmir.com team385
Archpriest Lawrence Farley168
Elissa Bjeletich98
Fr. Gabriel Bilas65