Hieromonk John (Guaita): We Hope that the Declaration Between the Pope and Patriarch Will Not Become Empty Words

We hope that these words will not remain empty intentions.
Hieromonk John (Guaita) | 30 May 2014
27 May, 2014. PRAVMIR. On the evening of May 25, 2014, on the premises of the Apostolic delegates in Jerusalem, Patriarch Bartholomew I and Pope Francis signed a joint declaration during a private meeting. 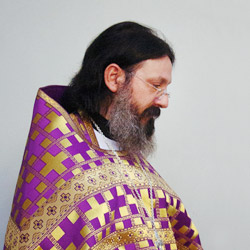 Hieromonk John (Guaita), a clergyman of the Church of the Mother of God “Joy of All Who Sorrow” in Moscow and an historian, shared his opinion with Pravmir:

“The reason for the meeting between Pope Francis and Patriarch Bartholomew this year is the 50th anniversary of the historic meeting of Pope Paul VI and Patriarch Athenagoras, which took place in Jerusalem in 1964. The first meeting between the Patriarch and Pope at the time was unprecedented. Until 1964, such a meeting was not possible.

“Jerusalem was chosen for the meeting in 2014 not only because it is an historic place, where 50 years ago the first meeting of its kind took place. Jerusalem was primarily selected as the city in which the Lord preached, died, and rose from the dead.

“The declaration consists of ten points. The first one says that in 50 years the Roman Catholic and Orthodox Churches have gone a long way towards meeting one another. The historic embrace between Pope Paul VI and Ecumenical Patriarch Athenagoras, after many centuries of silence, opened the way for the search for new relationships.

“Briefly describing the chronology of the development of the relations of the Churches, the Pope and Patriarch notes that the objective of full understanding has not been reached. However, certain results have been achieved, chief among which is the fact that for 50 years we have come to regard one another as members of one Christian family, disciples of one Lord Jesus Christ, and begun to respect and love one another.

“It is further repeated that both parties recognize that full communion, which includes full Eucharistic communion, has not yet been attained. Yet in the text of the declaration it is noted that both Churches yearn for the day when Catholics and Orthodox can receive communion from the same cup. Unfortunately, the declaration does not say when this will happen or in what way it will happen. However, it specifies the overall direction for the development of Orthodox-Catholic dialogue.

“Particular attention is paid to the Joint International Commission for Theological Dialogue between the Roman Catholic and Orthodox Churches. The declaration states that the Commission was able to achieve good results. The declaration spelled out the purpose of this dialogue. This objective is not to achieve any theological minimum or to lead the dialogue to its own kind of general theological denominator, which is necessary for communication. The purpose is full understanding and full communion.

“It is also stated that, regardless of the fact that the goal has not yet been attained, the Churches are urged to start joint action now. We are talking about a joint witness of Orthodox and Catholics to Christian morality and human values: protection of the traditional family, the struggle for peace and justice, and environmental protection. Last, ecology, which is the personal contribution of Patriarch Bartholomew.

“The declaration also calls attention to Christianophobia, which can be defeated by a joint open testimony of Orthodox and Catholics in contemporary culture. The Pope and Patriarch call on all Christians to carry on dialogue with all religions and, above all, with Judaism and Islam.

“The heads of the Churches are seriously concerned with the situation of Churches in the Middle East. The declaration speaks in particular of the situation in Egypt, Syria, Iraq, and throughout the Middle East. In the context of today’s world, marked by violence and selfishness, the Primates of the Churches once again urge all Christians, and all believers of other religions and people of good will, to strive for the universal reconciliation of the human family.

“The last point witnesses to the fact that Pope Francis and Patriarch Bartholomew are making a joint pilgrimage to the Holy Land and are praying so that dialogue between them could develop.

“Of course, this declaration has become a logical step in a series of steps taken by the Roman Catholic and Orthodox Churches to grow closer to one another. But we would still like to believe that this declaration would be that breakthrough that will bring about what it is for: full understanding and unity.

“The problem of such declarations is that they often remain at the level of the heads of the Churches, in this case on the level of the Pope of Rome and Patriarch of Constantinople. Whether it affects the lives of ordinary believers depends primarily upon us: the hierarchy and clergy, and not on the average believer. Let us hope that these words will not be empty intentions, but a specific program to address the still existing differences between the Catholic West and the Orthodox East.”