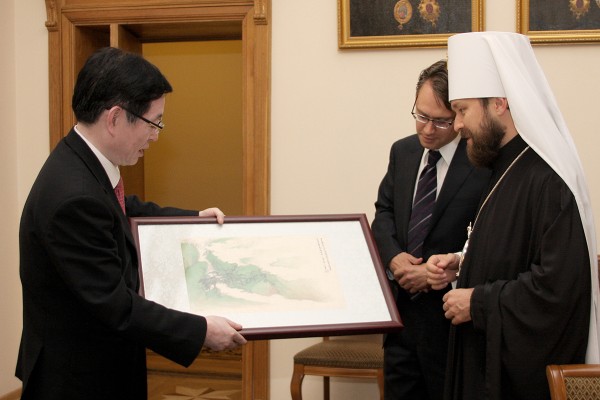 Taking part in the meeting were also archpriest Nikolai Balashov, DECR vice-chairman, and Mr. Dmitry Petrovsky, a DECR staff-member.
Metropolitan Hilarion of Volokolamsk greeted Mr. Wang Zuoan and reminded those present that in 2006, the chairman of the Department for External Church Relations, Metropolitan Kirill of Smolensk and Kaliningrad (now Patriarch of Moscow and All Russia), met with Mr. Ye Xiaowen who headed China’s State Administration for Religious Affairs at that time. Although His Holiness Patriarch Kirill’s area of responsibility has expanded considerably since then, he continues to give his personal attention to the Russia-China negotiations and cooperation in religious sphere, the DECR chairman noted.

Metropolitan Hilarion told the high guest about the history and work of the Department for External Church Relations, the oldest Synodal department of the Russian Orthodox Church.

“Behind my back there are portraits of six DECR chairmen. The present Patriarch, His Holiness Kirill, headed the Department for last twenty years,” Metropolitan Hilarion said. “It was he who laid the foundation of the cooperation that we continue to develop successfully. It is not fortuitous that he was the first Patriarch of Moscow who visited the Chinese land. It was the result of serious joint work of the Russian Orthodox Church and China’s State Administration for Religious Affairs.”

Mr. Wang Zuoan expressed his gratitude to His Holiness Patriarch Kirill for the invitation to visit Russia.

“Today and tomorrow we will have to work intensively together, and we hope that our work will be fruitful not only for the development of cooperation between our countries in religious sphere, but also for settling the issues concerning the Orthodoxy in China,” the head of the SARA said.

He called His Holiness Patriarch Kirill’s visit to China, which took place in 2013, “not only a very important event in the history of Russia-China bilateral relations, but also a historic landmark in the development of inter-faith, inter-confessional relations.”

Mr. Wang Zuoan emphasized the importance of the meeting between the Primate of the Russian Orthodox Church and the Chairman of the People’s Republic of China, Mr. Xi Jinping – it was the first and the only meeting between the present state leader of China and a religious leader of another country. “It was the manifestation of special respect not only for Russia, but for Orthodoxy as well,” the head of the SARA said. He also expressed his hope that the visit of the Chinese delegation to Russia would yield practical results and make its contribution to the development of bilateral relations.

Metropolitan Hilarion raised the issue of the preservation of tradition moral values in the modern world. Speaking about the role of the Russian Orthodox Church in Russia and other post-Soviet countries, the DECR chairman noted that it is not limited by meeting people’s religious needs. “The Church is also a bearer and a protector of fundamental moral values, including those values that are subjected to criticism, attacks, and erosion in the Western liberal society,” Metropolitan Hilarion said. “The Russian and the Chinese people share many of these values. We might have differences in religious issues, but we have a complete understanding regarding the fundamental moral values, on which the life of our peoples is based.”

The authority of the Church in the Russian society is based on the unique role that the Church has played for many centuries, since it was the Church that formed the cultural values that now attract attention of people from various countries, Metropolitan Hilarion noted. “Churches and golden domes are a landmark not only of the Russian Orthodox Church, but also of our state,” he said. “There was a time when religion was persecuted, when churches were destroyed or turned into storehouses. However, even at that time no one dared destroy the Kremlin Cathedrals. They were not used for services, but they were preserved in the very heart of our capital…”

As Metropolitan Hilarion pointed out, the Church today carries out the dialogue with almost all segments of society. For instance, the Patriarchal Council for Culture promotes relations with leading cultural figures of the country; the Department for Cooperation with the Armed Forces maintains relations with the army institutions and trains army chaplains.

“The Church renders much aid to the suffering, not only in her canonical territory, but beyond it as well,” the DECR chairman said. He informed the Chinese guests that the Russian Orthodox Church had often been in the forefront of saving people affected by natural disasters and rendering aid to the injured.

The Russian Orthodox Church is developing contacts with other traditional religious communities in Russia, Metropolitan Hilarion noted, saying in particular, “We have the Interreligious Council of Russia which convenes regularly; the Patriarch of Moscow and All Russia is its honorary chairman, not ex officio, but because he was elected to this post by all representatives of traditional confessions.”
Mr. Wang Zuoan thanked Metropolitan Hilarion for the detailed information and noted that China, like Russia, in the years of modernization was trying to preserve and promote traditional values. The head of the SARA believes that religion not only upholds those values, but is, actually, a value itself. It is necessary for people and it has a considerable impact on various processes in the life of modern society.

“As the Russia-China relations in religious sphere are developing, we should make our contribution to the widening of the scope of our cooperation and should promote its effectiveness,” the head of the Chinese delegation said.

The head of China’s State Administration for Religious Affairs especially noted the work of the Russia-China group for contacts and cooperation in religious sphere. The third meeting of the group will take place in Moscow on July 16.