On February 6, 2014, the chairman of the Moscow Patriarchate’s Department for External Church Relations, Metropolitan Hilarion of Volokolamsk, met in the DECR with the new ambassador of France to the Russian Federation, Mr. Jean-Maurice Ripert. Participating in the meeting were also Archimandrite Philaret (Bulekov), a DECR vice-chairman, Miguel Palacio of the DECR secretariat for far abroad, and Mr. Nicholas de Lacoste, first counsellor of the Embassy of France. 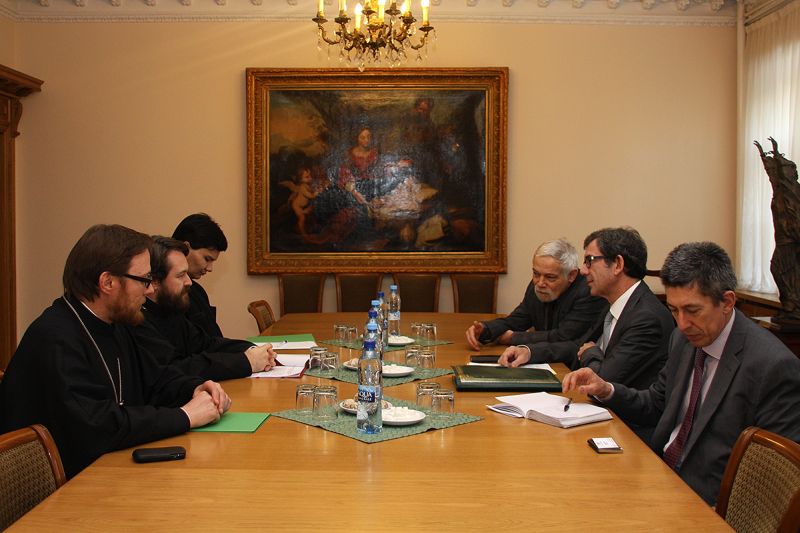 Metropolitan Hilarion welcomed the high guest, noting that the Russian Orthodox Church and France are bound by long-standing good relations. “In your country, there is a community of Russian-speaking compatriots, many of them being descendants of émigrés who made a considerable contribution to the development of culture and theology”, he said. He also expressed joy over the fact that a Russian Orthodox church would soon be built on the Quai Branly in Paris.

Metropolitan Hilarion expressed concern over the recent changes made in the French family legislation, which give same-sex couples an opportunity to formalize their union legally and to adopt children. He stressed that such actions are contrary to the moral norms of Christianity, which have historically occupied a substantial place in the life of the French society.

The DECR chairman also drew the attention of the French ambassador to the grave situation of Christians in the Middle East and North Africa. “The so-called Arab Spring has resulted in an upsurge of radicalism on religious grounds and almost complete disappearance of Christian communities in a number of states in the region. Today we are watching with concern the tragedy in Syria. Christians in that country are subjected to violence and have to flee their country”, he said.

The head of the French mission thanked Metropolitan Hilarion for the meeting. He expressed satisfaction with the fact that the project for building a church and religious and cultural center of the Russian Church will soon begin to be implemented and spoke about his visit to churches and monasteries in Russia.