Source: DECR
Natalya Mihailova | 27 May 2014
On May 25, 2014, His Holiness Neophyte of Bulgaria, while on a peace visit to the Russian Orthodox Church, visited the Sretensky Stavropegic Monastery in Moscow. 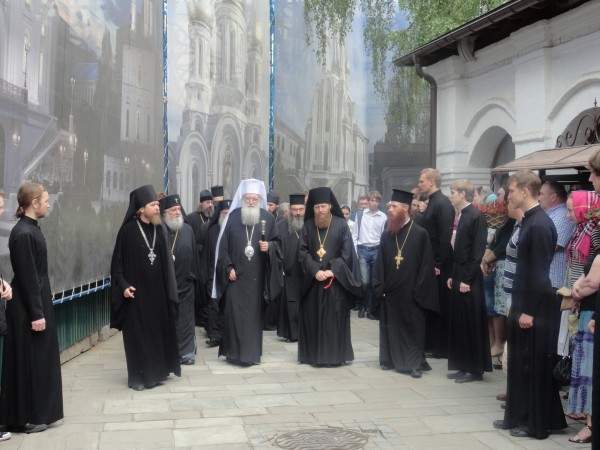 His Holiness and his large party were welcomed to the monastery by its father superior, Archimandrite Tikhon (Shevkunov), who introduced his high guests to the history of the Sretensky Monastery. Then Patriarch Neophyte proceeded to the Cathedral Church of Our Lady of Vladimir and venerated the relics of the Holy Martyr Hilarion (Troitsky) in it.

Addressing those present in the church, His Holiness recalled that as a student of the Moscow Theological Academy he used to frequent the Sretensky Monastery, which preserves the living memory of historical bonds between the Russian and Bulgarian Churches and peoples. He also commended the important educational mission that the monastery carries out in the best traditions of holy Orthodoxy.

The Patriarch of Bulgaria presented the monastery with an icon of the Holy Patriarch Euphemius of Tarnovo, who was the last patriarch before the Ottomon yoke, and St. Cyprian, Metropolitan of Kiev and Moscow.

In his response, Father Tikhon underlined that Bulgaria is held dear by the monastery because St. Cyprian who founded it was a Bulgarian from Tarnovo. He also spoke about the great role that St. Cyprian played in Russian history.

Patriarch Neophyte and his delegation shared a meal with the brethren of the monastery and students of the Sretensky Seminary.

Then the Patriarch and his party were taken on a tour of the seminary, its lecture hall, library, dormitory and sports hall.

In the seminary assembly hall, seminarians gave a concert for the Bulgarian church delegation.