Delegation of Coptic Church completes its visit to Russia

Source: DECR
Natalya Mihailova | 26 June 2017
On 23 June 2017, the delegation of hegumens and monks of the Coptic monasteries concluded their pilgrimage to Russia, which was carried out in compliance with the agreements between His Holiness Patriarch Kirill of Moscow and All Russia and His Holiness Patriarch Tawadros II of the Coptic Church within the framework of the Bilateral Commission for Dialogue between the Russian Orthodox Church and the Coptic Church. 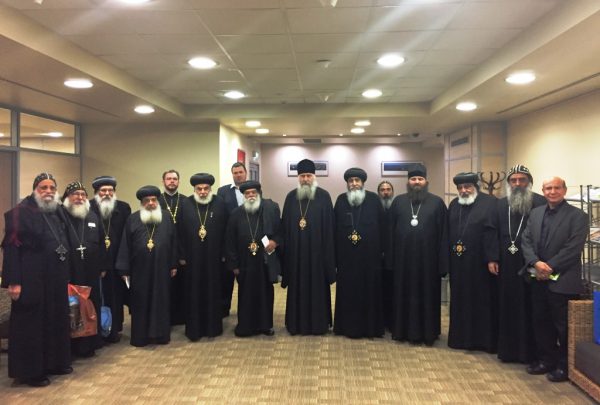 During their pilgrimage, the Coptic monks visited churches and monasteries in Moscow and the Moscow Region and met with His Holiness Patriarch Kirill of Moscow and All Russia.

On June 17, the delegation of the Coptic Church visited St. Daniel’s Monastery, the Novospassky Monastery, and the Convent of the Protecting Veil of the Mother of God.

On June 18, the guests attended the Divine Liturgy in the Cathedral of Christ the Saviour, celebrated by His Holiness Patriarch Kirill of Moscow and All Russia. After the service, they had a meeting with His Holiness. Later that day the Coptic delegation visited the Laura of the Holy Trinity and St. Sergius where they venerated the holy relics of its founder and attended the reception given in their honour by Archbishop Feognost of Sergiev Posad.

On June 21, the members of the delegation visited the cathedrals of the Moscow Kremlin, the Sretensky Monastery and the theological seminary located there, as well as the Vysokopetrovsky Monastery.

On June 22, the representatives of the Coptic Church venerated the shrines of the Ugresha Monastery of St. Nicholas, the Zachatievsky Convent, and the Donskoy Monastery. At the Donskoy Monastery, they were met by Bishop Paramon of Bronnitsy and shown around the abode and its necropolis. The guests from Egypt saw the places related to the earthly life of the Holy Patriarch Tikhon, whose holy relics are kept in the monastery.