Natalya Mihailova | 11 April 2014
On April 9, 2014, the delegation of Turkey’s Presidency of Religious Affairs, while on a visit to Russia for the 2nd meeting of the joint working group, visited the St. Sergius Monastery of the Holy Trinity and Moscow Theological Schools. The guests were accompanied by Rev. Dimitry Safonov, head of the DECR section for interreligious contacts and Rev. Mikhail Bogdanov, DECR protocol section. 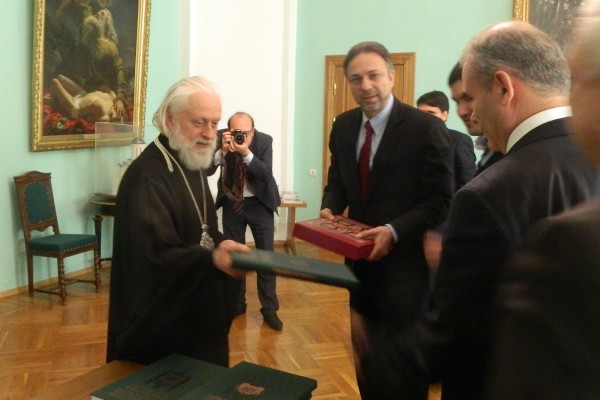 After a tour of the monastery’s architectural sights and major shrines, the delegation met with the rector of Moscow Theological Schools, Archbishop Yevgeny of Vereya, who introduced them to the history and the present life of the academy and seminary, as well as various aspects of the training process and students’ life. The leader of the delegation, Prof. Dr. Mehmet Paçaci, head of the Presidency of Religious Affairs foreign relations department, expressed interest in developing contacts between theological schools in Turkey and Moscow Theological Academy and thanked His Eminence for the possibility to meet. Archbishop Yevgeny presented the guests with albums on the history of the monastery as tokens of the meeting.

Answering questions from students, Prof. Mehmet Paçaci spoke about the protection of architectural and cultural monuments including measures for preserving traces of Christian heritage in them and stressed the need for a competent approach to be made in studying them. Present at the meeting were students of the Academy’s MA course.

Most viewed articles
Open Doors warns of rapidly growing threat of digital persecution against Christians109
Saved? Not Yet100
Focusing On God Instead Of Ourselves82
Assembly of Bishops Announces Peace of Mind, a Training Program in Mental Health First Aid65
Metropolitan Anthony of Volokolamsk Makes a Working Visit to Paris64
Finding God Amidst the Noise42
Bishop Irenei of London and Western Europe visits the Memorial Church of St Job and the Church of the Resurrection of Christ in Brussels27
Most popular authors
Pravmir.com team157
Tola Mbakwe109
Archpriest Basil Ross Aden101
Fr. James Guirguis82
Archpriest Stephen Freeman42