Source: DECR
Natalya Mihailova | 23 April 2015
The Department for External Church Relations of the Moscow Patriarchate (DECR) has elaborated with the blessing of His Holiness Patriarch Kirill and began realization of the project ‘Humanitarian aid to victims of armed conflict in the East of Ukraine’. 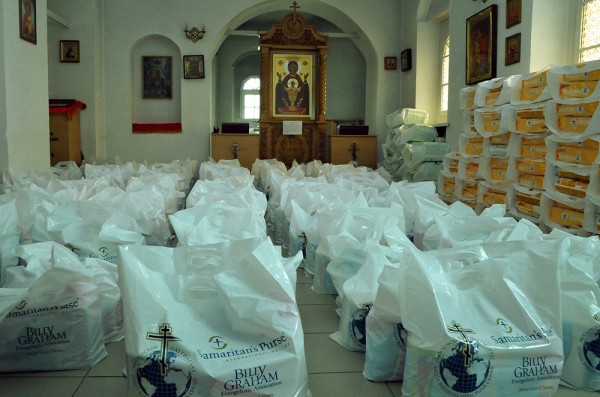 Aid on the territory of the Rostov and Belgorod regions will be provided with the assistance of the Samaritan’s Purse humanitarian organization and the Billy Graham Evangelical Association and with support of the Don and Belgorod Metropolias.

The aid to the forced migrants from Ukraine includes individual hygienic sets and non-perishable food (also for children). Sixty-five thousand packages will be distributed in May.

A delegation, which includes representatives of the DECR, Samaritan’s Purse and the Billy Graham Evangelical Association, visited the distributing points in Rostov-on-Don, Shakhty and Novoshakhtinsk.

Four hundred and fifty people received hygienic sets at the centre of humanitarian aid of the Don Metropolia in Rostov-on-Don on April 21.

Ms Nelybova of the DECR noted that inter-Christian cooperation had a long history. The Russian Orthodox Church and Christian Churches of other countries rendered assistance to people in emergency situations, for instance, to the victims of the armed conflict in Chechnya. Yet it is for the first time that the Samaritan’s Purse and the Billy Graham Evangelical Association take part in the aid to the Ukrainian refugees.

Revd. Yevgeny Osyak, head of the Department for Church Charity and Social Ministry of the Rostov diocese, said that some one hundred and twenty refugees receive help in the Centre every day.

The distribution began in the Shakhtinsk diocese, too. On April 21, the refugees received seventy-five hygienic sets in the Cathedral of the Intercession in the city of Shakhty, and two hundred and forty sets in the city of Novoshakhtinsk.

Revd. Vladislav Kasianov, chairman of the Department for Church Charity and Social Ministry of the Shakhtinsk diocese, said that all parishes in the border area had arranged distributing points, and all migrants accommodation centers were provided with movable chapels in which priests of the Russian Orthodox Church celebrate divine services, thus rendering spiritual support to the forced migrants.

Most viewed articles
Number of Christians Murdered for Faith Rose 60 Percent in 2020: 50 Most Dangerous Countries to Be a Christian170
Admitting That We Hate162
Funeral for Metropolitan Philaret Held in Minsk104
Building a Fire and Preparing for Theophany80
Churches to Reopen in Greece on January 1846
God Is With Us… And Nothing Else Matters37
I Have Fought the Good Fight, I Have Completed the Race23
Most popular authors
Charlene Aaron170
Archpriest Michael Gillis162
Pravmir.com team149
Fr Gregory Scratch80
Fr. Gabriel Bilas37
Metropolitan Hilarion (Alfeyev)23
Maria Trushanina1