Source: The Christian Post
Samuel Smith | 16 June 2017
As religious figures have voiced their concerns with the Trump administration's efforts to deport dozens of Iraqi Christians, one Chaldean bishop has compared the roundup and possible deportation of Iraqi nationals to the United States' refusal to allow Jewish refugees facing genocide into the country during the Holocaust. 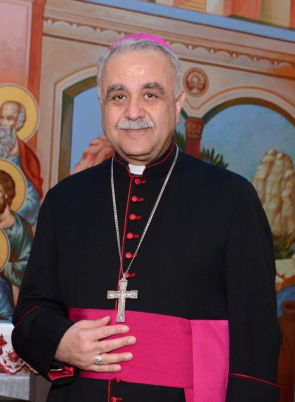 “In 1939, the Cuban government, and then the U.S. government refused entry to hundreds of Jewish refugees fleeing Germany. They were forced to return to Europe, and many perished in the Holocaust,” the Most Rev. Bawai Soro, a bishop of San Diego’s Chaldean Catholic Diocese of St. Peter, wrote in an op-ed published by The Hill on Thursday criticizing the arrest of the 199 Iraqis, 114 of which were made in the Detroit area.

“The story of the S.S. St. Louis — popularly known as the “voyage of the damned” — remains one of the darkest episodes of the Roosevelt administration. And it should serve as a cautionary tale for the Trump administration today.”

As has been reported, Immigrations and Customs Enforcement have recently arrested as many as 199 Iraqi nationals, mostly Christians and from the Detroit area. According to Reuters, U.S. officials said on Wednesday that the roundup of the Iraqis in the past few weeks began after the Iraqi government agreed to accept deportees as part of the negotiations for it to be removed from a list of countries affected by President Donald Trump’s travel ban.

According to Gillian Christensen, ICE spokeswoman, an overwhelming majority of the arrested Iraqi nationals had criminal convictions for charges that include murder, rape, assault, weapons violations, kidnapping, drug trafficking and burglary.

Even though Trump has vowed to deport undocumented immigrants with criminal records, the reports of the Iraqi Christians’ arrests and potential deportation has stirred outrage.

Soro asserted that it has been over eight decades since the U.S. returned refugees facing genocide to “countries where they might perish.”

“Now, we are about do so again,” he contended, adding that as many as 300 Iraqi Christians are slated for deportation to Iraq.

Iraq, where the Islamic State terrorist group controls swaths of territory, is ranked as the seventh worst nation in the world when it comes to the persecution of Christians, according to Open Doors USA’s 2017 World Watch List. Hundreds of thousands of Christians and other religious minorities in northern Iraq were forced to flee their homes or risk being killed when IS (also known as ISIS, ISIL or Daesh) rose to power in the summer of 2014.

“Though the circumstances differ somewhat from those in 1939, what our country stands on the cusp of doing is, in many ways, even worse,” Soro argued. “In 1939, we refused entry to people fleeing Hitler. We did not forcibly return them to Germany. Upon their return to Europe, the passengers went to many countries such as Belgium, France and Britain. Of course, two of those countries subsequently fell to the Nazis, who continued persecuting — and in many cases killing — those who had fled in 1939 and could have had been saved had the United States admitted them.”

“History has never forgiven us,” he added. “In this case, the government has stated that it plans to deport individuals who live in the United States and are members of a tiny religious group facing genocide in their home country.”

It is widely recognized that Christians, Yazidis and other religious minorities have faced a genocide at the hands of IS. Not only has the United States government and Congress recognized that fact, but it has also been recognized by the European Parliament and a United Nations human rights panel.

Although Iraq used to have a Christian population of about 1.5 million, now there are believed to be only about 200,000 Christians left in the Middle East.

“God only knows who gave this specific order. Whether it is the ‘deep state’ at work, or a political order, however, the effect remains the same. The American government, for the first time ever, is about to deport to a country undergoing an active genocide the very people targeted in that genocide,” Soro wrote. “We are not returning these Christians to the country they knew, we are returning them to a post-apocalyptic situation in which Christian towns, villages and neighborhoods have been totally destroyed by ISIS.”

Soro maintained that the Trump administration should come up with a solution that does not require returning Iraqi Christians to Iraq in the midst of an ongoing genocide.

“It should do this not because the Iraqi Christian community supported the president and was the margin of victory in Michigan. It should do this because it is the right thing to do,” he maintained.

The Huffington Post reports that the American Civil Liberties Union has slowed down the administration’s efforts to deport the Iraqis by filing a class-action petition that claims that deporting them back to Iraq would be unlawful.

“U.S. law prohibits the removal of individuals to countries where they would face a likelihood of persecution or torture,” the petition states. “Yet despite the clear danger that many of these individuals face in Iraq, ICE is attempting to deport them based on outstanding removal orders that do not take account of intervening changed circumstances which should entitle them to protection.”

A hearing has been set for next Wednesday afternoon. According to Rana Elmir, the deputy director of the ACLU of Michigan, the earliest the deportations can begin is next Friday.