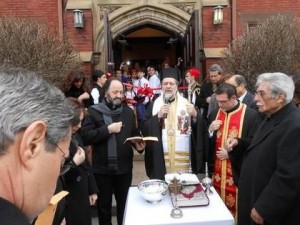 The Greek-American community of Detroit celebrated both its heritage and its future at the Grand Opening of the Hellenic Museum of Michigan in downtown Detroit on April 13. Located across the street from the Detroit Institute of Art (DIA), the stately brick structure houses the artifacts and stories of the community and aims to share “the richness of the Hellenic Heritage of the Greek community,” with its Detroit neighbors and to convey it to its children and grandchildren.

Metropolitan Nicholas presided, assisted by Fr. Nicholas Kyritzes of St. John of Sterling Heights and Fr. Michael Varlamos Kimisis of St. Clair Shores. Ioanna Efthymiadou, Consul General of Greece traveled from Chicago for the auspicious event and read the epistle. The Metropolitan urged the guests to pay close attention to the people in the museum’s historic photos, saying, “It’s important that our people have a history. We come from something that is great, unique and unrepeatable, it is who we are and how we understand ourselves.”