Source: DECR
Natalya Mihailova | 02 June 2015
On May 28, 2015, the Divine Liturgy was celebrated at the Damascus Representation of the Russian Orthodox Church. 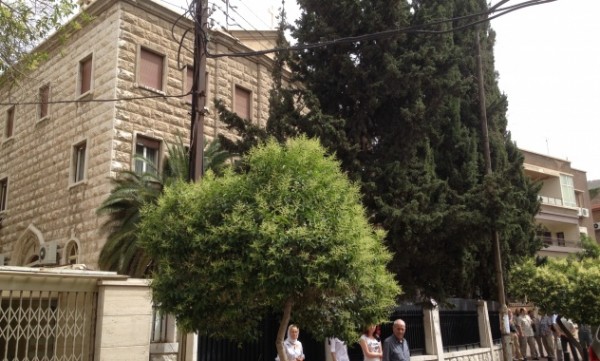 Celebrated by Hegumen Arseny (Sokolov), representative of the Patriarch of Moscow and All Russia to the Patriarch of Great Antioch and All the East, the service was attended by the delegation of Russian parliament members and public figures who had brought humanitarian aid consisting of food stuffs and medicines to the country suffering from war. Among the worshippers were staff members of the Russia embassy and a few parishioners who could not evacuate and had to stay in the capital.

The delegation led by D. Sablin, a member of the Russian Federation Council, was in Syria from May 25-28. They met with Mr. Wael Nader al-Halqi, President of the Syrian Council of Ministers, Mr. Muhammed Jihad al-Laham, speaker of the People’s Council, Dr. Omran Ahed al-Zoubi, minister of information, and the Supreme Mufti of Syria Ahmad Badreddin Hassoun.

The Russian guests visited a hospital and orphanages to give them humanitarian aid for the patients and orphans.

On May 26, they met with bishops of the Patriarchate of Antioch who serve in Syria. The delegation was accompanied by Hegumen Arseny, the website of the ROC Representation reports.