Does Vaccine Against COVID Cause Thrombosis? Why Was the Use of AstraZeneca Vaccine Suspended in Europe?

Source: Pravmir (Russian)
How to deal with the pandemic if there are not enough vaccines for everyone?
Irina Yakutenko | 17 March 2021

Several European countries, including Germany, France and Italy, have announced that they are stopping vaccination against coronavirus with the drug from AstraZeneca. The reason is reports of rare thrombotic pathologies, which occurred in time suspiciously close to vaccination. Irina Yakutenko, a molecular biologist and scientific journalist, explains how dangerous these complications are and what the prospects for a vaccine campaign are.

The vaccine from the Anglo-Swedish company AstraZeneca experienced failure from the very beginning. At first, the trials of the drug went very vigorously, and many experts predicted a great future for the vaccine, especially since the manufacturers promised a low price. But unexpectedly, vaccines based on mRNA technology have taken the lead, although until now it has not been used in humans.

The test results have shown a fantastically high efficiency of mRNA vaccines. Compared to numbers over 90%, the pretty decent 70% of the AstraZeneca looked pale. Moreover, the company’s PR specialists could not easily explain that 70% is the typical efficiency obtained by averaging the results of trials of two vaccination modes. In one, the volunteers received two full doses of the vaccine, and the effectiveness was 62%, and in the second mode, they were first given half the dose, and then the whole dose, in which case the numbers were comparable to the data for mRNA vaccines.

Most likely, the reason for the low efficiency when injecting two full doses was the immunity to the adenovirus itself, which arises after the first vaccination. However, the manufacturers did not write about this directly. Obviously, to avoid the logical question: “Why didn’t you immediately think about such a scenario, isn’t it obvious?” 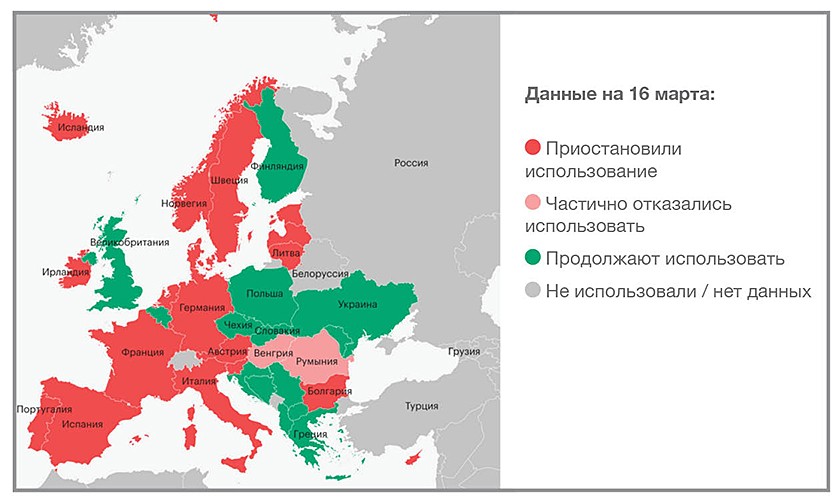 The company explained the use of two dose modes in its press release … by a mistake in the dilution of vaccines. Of course, this only increased the mistrust: to be mistaken in trials worth billions of dollars, and even in a situation where the vaccine is urgently needed? As a result, reports of the successes of the third phase looked cloudy and inconclusive.

Paradoxically, the low price of the vaccine – less than $4 per dose – further increased mistrust: there was an unspoken consensus in Europe that the AstraZeneca vaccine was a second-class drug, a surrogate for the poor.

This image has nothing to do with reality: the test results show that the volunteers develop good antibody titers, and the incidence in the vaccinated group is much lower than in the unvaccinated.

Moreover, the drug prevents not only a severe course, but also asymptomatic carriage – the effectiveness of the AstraZeneca vaccine in this parameter was 60%. In other words, the vaccine protects well against infection, which is extremely important for stopping the pandemic.

It is worth noting that the company representatives themselves did a lot to create the most negative impression about the vaccine.

For example, they published preliminary results of trials in South Africa, as a result of which the country refused to inoculate the population with this drug, since it did not work against a new South African strain, which today accounts for almost 100% of all infections in South Africa. At the same time, the collected data is in no way enough to draw statistically reliable conclusions.

In addition, in the 2000-person study, there were no deaths – neither in the vaccine group nor in the control group. This could indicate both that the vaccine protects against the lethal course of covid, and that the experiment was interrupted too early. Moreover, scientists looked at the effect of the vaccine in young healthy volunteers, and not at the real, especially the Western population, with a high percentage of the elderly and sick. But the representatives of the company could not explain all this properly, and as a result, people following the news got the impression that the vaccine definitely does not work against new strains. Although, for example, its efficiency is not reduced with respect to the British strain, which is taking over Europe much faster than the South African one.

Finally, it is not clear from the study whether the volunteers received two identical doses or were vaccinated with a more effective mode of two different doses. But the representatives of the company could not explain all this properly.

A Strange Side Effect

But whatever the skepticism, there will not be enough mRNA vaccines for the entire population of the Earth, so many dozens of countries around the world began to vaccinate people with the drug from AstraZeneca. Everything was going neither well nor bad, when suddenly a new blow fell on the unfortunate vaccine.

In early March, Austria suspended vaccination with the drug from a huge batch, which was then used in Europe, as the country had two suspected cases of thrombotic complications in people who had recently been vaccinated.

Although the link between thrombosis and vaccination has not yet been proven, the news was immediately disseminated by journalists, who were already using the inappropriate tone of the official press release.

Following Austria, other European countries began to report strange thrombosis, possibly related to vaccination, and a few days later reports began to appear that one or another country interrupts the vaccination of people with the AstraZeneca vaccine. Regulators in all countries clarified that they are not abandoning the drug altogether, but they plan to carefully study all the described examples of complications and find out whether they are associated with vaccination or if unusual thrombosis has other reasons.

At the same time, it was not specified what kind of complications were meant. The situation became clearer when Germany suspended the use of the AstraZeneca vaccine: the Paul Ehrlich Institute – the agency that evaluates the safety and efficacy of vaccines – clarified that we are talking about cases where people simultaneously had two very rare conditions. The first is clogging of certain cerebral veins by blood clots, through which blood flows from the brain. And the second is thrombocytopenia, an extreme drop in the number of platelets, blood elements responsible for its clotting. That is, people who came to the attention of German doctors simultaneously developed two opposite pathologies: thrombosis and a condition that radically increases the risk of bleeding. Since the start of the vaccination campaign with the AstraZeneca vaccine in Germany, there have been seven patients with this combination of complications, three of whom have died.

What Else Causes Blood Clots

Sinus thrombosis of the dura mater (the full name of the revealed pathology) is a long-known, albeit rare disorder. According to the calculations of specialists from the Paul Ehrlich Institute, in the absence of external factors during the period of vaccination with the drug from AstraZeneca one case should have been identified in the population, on average. In other words, this pathology was observed seven times more often than usual, which prompted scientists to suspect a connection with vaccination. Even so, sinus thrombosis of the dura mater remains an extremely unlikely event: more than 1.6 million people have received the AstraZeneca vaccine in Germany.

The reasons why some people – by the way, mostly young ones – form blood clots in the vessels that drain blood from the brain are unclear. It is believed that a combination of several risk factors leads to this: a tendency to form thrombosis, including genetically determined ones, female gender, recent childbirth, taking hormonal drugs, some infections, or head injuries. Indirectly, the assumption of an individual predisposition to the development of this complication – whatever its cause – reinforces the fact that six out of seven patients were relatively young women (age 20 to 50). The seventh patient was a man and his symptoms were slightly different. Although, of course, it is impossible to draw statistically reliable conclusions on such a small sample.

Other European countries, which suspended vaccination with the AstraZeneca vaccine until all the circumstances were clarified, did not specify which thrombotic pathologies aroused suspicions among specialists. Interestingly, thrombocytopenia of an unclear nature was also observed in the United States, where people are inoculated with mRNA vaccines. There, too, we are talking about isolated cases for tens of millions of injected doses.

In general, a drop in the number of platelets as an extremely rare complication after vaccination has been known for a long time – it is characteristic of vaccination against measles-mumps-rubella, but the frequency of this pathology cannot be compared with the frequency of thrombocytopenias developing as a consequence of these infections themselves.

Besides, carried away by the persecution of anti-coronavirus vaccinations, the world has forgotten that thrombosis, including fatal ones, is a frequent complication of some very popular drugs. For example, this pathology is well documented for birth control pills. Life-threatening thrombosis, including thrombosis of the sinuses of the dura mater, does not occur in every woman taking contraceptives, but the risk is very real. This is written in the instructions for the drugs, and the responsible doctors must warn the patients about it.

However, in many countries, birth control pills can be purchased even without a prescription, and no one is calling for a ban due to the deadly danger. Because the presence of undesirable side effects in itself cannot be a reason for the prohibition of a particular drug.

Any medications have undesirable effects, and it is not the very fact of their presence that is decisive, but the ratio of risk and benefit from the use of this drug.

In the case of vaccines against coronavirus, the connection between thrombotic complications or a drop in platelet count and vaccination has not been proven, but if it turns out that in some people they can actually develop as a result of vaccination, it is important to remember that the frequency of these pathologies is a handful per a million vaccinated.

The incidence of vascular complications in hospitalized patients with covid, according to different sources, varies from 3% to 13%. And a significant part of these complications lead to death. To date, according to official figures alone, more than 2.6 million people have died from the coronavirus and its consequences.

Will We Suffer From Flu Even Harder? What Else Can Replace COVID-19?

Scientists find it harder to create a vaccine, and herd immunity is weakened

British Strain of Coronavirus Is Especially Dangerous for Children – Is it True?

Irina Yakutenko comments on the statement of doctors from Slovakia

A New COVID Strain Again. Brazilian This Time. Should We Be Afraid of It?