The Donetsk and Gorlovskij Diocese Announces a Strict Fast

Source: Pravmir.ru
The faithful are called to intensify their prayers for peace and the cessation of military confrontation.
Natalya Mihailova | 03 June 2014
According to an ancient Church tradition, the Donbass faithful will fast strictly and pray for peace in Ukraine. 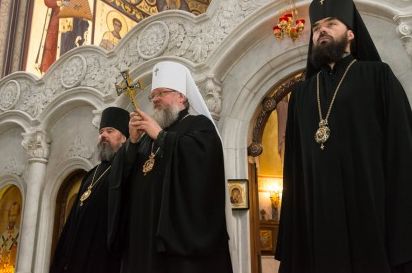 PRAVMIR. Metropolitan Hilarion of Donetsk and Mariupol, remembering the Church’s tradition of intensified fasting and prayer during troubled times, has blessed that this coming week be one of strict fasting.

This is reported by the press service of the Donetsk diocese.

– To bring to the knowledge of the episcopate, clergy, monastics and all the faithful of the Donetsk Diocese His Eminence’s appeal to end the violence in the Donbass;

– From Monday, June 2, to Saturday, June 7, before the feast day of the Holy Trinity (Pentecost) to fast strictly and pray intensively for peace and the cessation of military confrontation.

This good initiative has resonated in the Gorlovskij diocese, since its city of Slaviansk has been under attack for already one and a half months. Archbishop Mitrophan of Gorlivka and Slaviansk also urged clergy and parishioners of the diocese who have the strength and will to fast and strengthen their prayers for peace on Ukrainian soil.

Most viewed articles
A Noetic Life53
Will Everyone Be Saved?49
We Must Pray for All: The Salvation of the World According to St Silouan28
Metropolitan JOSEPH’S Encyclical for the Year of Youth18
“Basic Sight-Singing and Ear Training for Church Singers” Course to Begin October 49
Patriarch Kirill Consecrates Restored St. Alexander Nevsky Cathedral in Volgograd7
The Birth of Our Most Holy Lady: Reason for Spiritual Joy and Exaltation1
Most popular authors
Archpriest Stephen Freeman52
Jacob Sparks49
Metropolitan Kallistos (Ware)28
Archbishop Joseph of New York and Metropolitan of All North America18
Pravmir.com team16
Maria Trushanina1
Archimandrite Ephraim of Vatopedi1