Source: Interfax-religion.com
Natalya Mihailova | 19 December 2014
Moscow, December 19, Interfax - Ukrainian militants robbed the Hermitage of Holy Iveron Monastery and the Donetsk diocesan residence in the Peski village, the Yasinovataya District, the Donetsk Region, which is the territory under their control, Metropolitan Hilarion of Donetsk and Mariupol says. 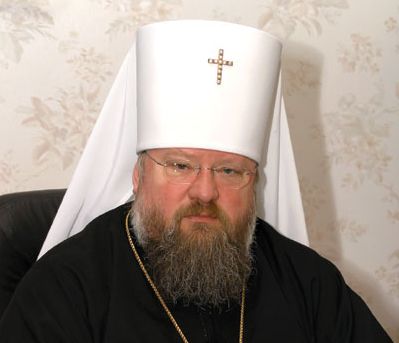 Metropolitan Hilarion of Donetsk and Mariupol

“On December 18, at about 10:30 a.m. ten armed people in a military truck dressed in uniform rushed into the hermitage, they officially introduced themselves as soldiers of the Ukrainian National Guardia. These people demanded to open the residence, they claimed it was needed for “an obligatory check,” and it was done inviolately,” the metropolitan writes in his address to Ukrainian president Pyotr Poroshenko as it is posted at the diocesan website.

According to the hierarch, after the militants had examined the building of service-utility corpus, nuns and a church guard came in, “Ukrainian militants took their passports, mobile phones, locked the door and blocked it from the outside.”

So happened that several hours after, diocesan officials came to the hermitage, they brought foodstuff and things necessary for the nuns and the guard. They saw the gates were wide open, the bandog was shot, and there were numerous traces of truck wheels on the ground and asphalt. Then diocesan officials found the nuns and the guard locked in the hermitage building and released them.

“When the diocesan residence was inspected after Ukrainian militants visit, it was found out that it was robbed, valuable things, icons, clerical aids, kitchen sets and many other things were stolen,” the address reads.

Most viewed articles
Critical Theory, Social Justice, and the Attempt to Disfigure the “Transfiguration”188
Patriarch Kirill Urges Believers to Fight New Idolatry in Their Own Lives126
The Frontier of Personhood119
Disoriented73
Bell-Ringing Unites Believers from Different Countries on the Day of the Baptism of Rus (+Video)61
Saint Macrina the Younger as a Model for our Lives1
Christ Forgives and Heals1
Most popular authors
Pravmir.com team187
Eric Hyde187
Archpriest Stephen Freeman120
Fr. Stephen Powley73
Protopresbyter Fr. George Papavarnavas1
Fr. Theodore Stylianopoulos1