Source: Focus Information Agency
Natalya Mihailova | 12 April 2015
Moscow. The self-proclaimed Donetsk People’s Republic will set up a fund to restore churches destroyed in the war in eastern Ukraine, the parliamentary speaker of the republic said on Tuesday, as cited by TASS. 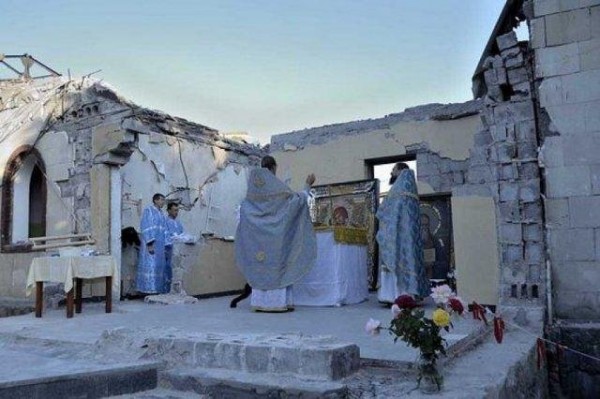 “Both executive authorities and charitable organisations will be involved in the fund’s activities,” Andrei Purgin was quoted by the Donetsk news agency as saying. “We will restore only those churches where repairs are possible. If a sanctuary is badly damaged, a new church will be built in its place.”

According to the Donetsk Diocese of the Ukrainian Orthodox Church of the Moscow Patriarchate, some 72 Orthodox places of worship were damaged and another ten completely destroyed during months of fighting between Ukrainian government forces and people’s militias.

Most viewed articles
Patriarch Kirill: Not Only People, But Churches Too, Can Depart from God222
A Christianity of the Catacombs183
The Truth About Riches116
Thoughts on Theophany and Revelation101
Archbishop Makarios of Australia: ” the Great privilege of the Orthodox Church is that we live in communion”69
Metropolitan Onuphry Speaks on How to Protect One’s Soul From Sin55
Most millennials, Gen Z adults support bans on abortions when baby’s heartbeat is detected: poll30
The Muskox Response To COVID-198
How to live the Spiritual Life (Part I)1
Most popular authors
Pravmir.com team376
Archpriest Lawrence Farley183
Fr. Gabriel Bilas116
Elissa Bjeletich101
Archpriest Michael Gillis8