Dormition Church in Beijing Celebrates 10th Anniversary of Its Consecration 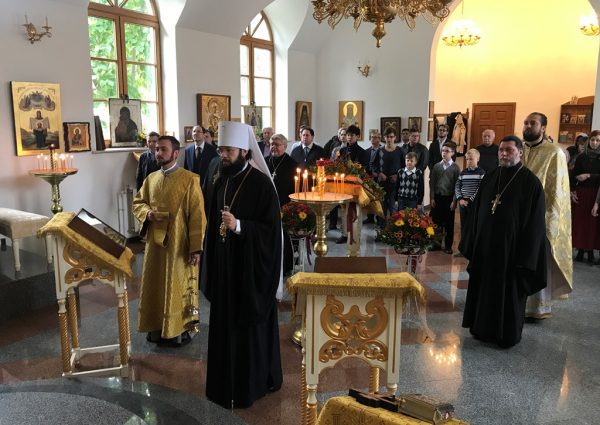 On 19 October 2019 the Orthodox Church honours the memory of the Holy Apostle Thomas who, according to the church tradition, preached the word of God in Asia and reached China. Metropolitan Anthony of Korsun and Western Europe, head of the Moscow Patriarchate’s Administration for Institutions Abroad, celebrated the Divine Liturgy at the Church of the Dormition located in the territory of the Embassy of the Russian Federation in the People’s Republic of China.

Praying at the church together with many representatives of the international Orthodox community of Beijing were H.E. Andrei Denisov, Ambassador Extraordinary and Plenipotentiary of the Russian Federation to the People’s Republic of China, Mr. Ivan Zhelokhovtsev, Minister Counselor of the Russian Embassy; Mr. Sergei Chernenko, Russian Consul General in Shenyang; Mr. Dmitry Petrovsky, a staff member of the Moscow Patriarchate’s Department for External Church Relations (DECR).

After the divine service, Metropolitan Anthony warmly welcomed the worshippers and conveyed to the blessing and greeting of His Holiness Patriarch Kirill of Moscow and All Russia with the 10th anniversary of the consecration of the church which has become a centre where Orthodox compatriots and citizens of other countries living in Beijing are gathering. Metropolitan Anthony underscored that the Primate of the Russian Orthodox Church, while being the DECR, was paying great attention to the revival of the Dormition Church in the capital of China. His Eminence noted the high symbolic value of the celebration of the church’s 10th anniversary on the commemoration day of St. Thomas who has brought Christ’s good news to China.

Metropolitan Anthony presented a gift to the church – an icon of St. Tikhon, Patriarch of All Russia, and a shrine with a set for the sacraments of baptism and anointing.

Hieromonk Innokenty expressed heartfelt gratitude to Metropolitan Anthony for common prayers and attention to the only Orthodox church in Beijing and presented him an icon of St. Innocent of Irkutsk, the first bishop appointed to serve in Beijing, with a part of his relics.

H.E. Denisov gave a reception on the occasion of the 10th anniversary of the church in Beijing. Attending were guests and representatives of the Ministry of Foreign Affairs and the United Front Work Department of the Communist Party of the People’s Republic of China.

The first Orthodox church of St. Sophia was consecrated in Beijing in 1696, damaged at the earthquake in 1730, and consecrated after repairs in honour of the Dormition of the Most Holy Theotokos in 1732. The church was destroyed in 1900 during the Boxer Rebellion. In 1902, the Church of the Dormition at the Russian Ecclesiastical Mission in China was set up on a new site as a temporary refectory, while a Cathedral of the Holy Martyrs was being built. The Mission was closed in 1954, and its territory was used by the Embassy of the USSR as a garage.

The restoration of the Church of the Dormition has been discussed at the Russian-Chinese high-level talks since 2006, and on October 13, 2009, the church was consecrated by Bishop Mark of Yegorievsk (now Metropolitan of Ryazan and Mikhailovsk). The next day Mr. Vladimir Putin, then the Chairman of the Government of the Russian Federation, who was paying an official visit to the PRC, visited the restored Church of the Dormition and donated an icon of the Intercession of the Most Holy Theotokos.