Source: Interfax-religion.com
Natalya Mihailova | 19 May 2015
Vienna, May 18, Interfax - Dozens of priests of the Ukrainian Orthodox Church of Moscow Patriarchate (UOC MP) are leaving Ukraine in fear of persecutions, the head of the sector for interreligious liaisons at the Russian Orthodox Church's Synodal Department for External Church Relations Priest Dimitry Safonov told on Monday. 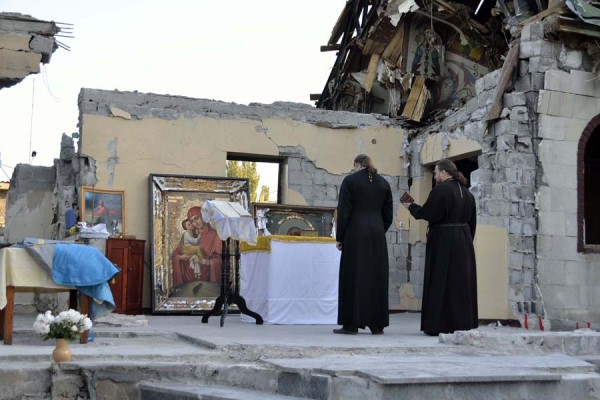 “There are dozens of priests who had to leave Ukraine. The exact statistic is currently impossible. They are pressured into leaving Ukraine. Their families are getting death threats, they themselves are facing the threat of physical violence,” he told an Organization for Security and Cooperation in Europe (OSCE) conference on combating the intolerance and discrimination towards Christians in Vienna.

A total of 77 churches and monasteries have been damaged or demolished during the military conflict in eastern Ukraine, the priest said.

“By now there have been credible reports about 19 churches of the Ukrainian Orthodox Church having been violently seized by the so-called “Kiev Patriarchate”. This religious organization was formed in Ukraine in 1992 and has not been recognized by any of the Orthodox Churches worldwide,” the priest said.

All actions against the Ukrainian Orthodox Church “are motivated precisely by religious and national hatred,” he said.

Earlier the UOC MP chancellor Metropolitan Anthony of Borispol and Brovary complained to the Ukrainian president Pyotr Poroshenko about the seizure of the churches.

Nine UOC churches have been destroyed and another 77 damaged as a result of the hostilities in Donbass, which has 1,100 Orthodox churches and 17 monasteries, he said.

Most viewed articles
A Great Time to Join the Orthodox Church220
New Jersey Governor Signs Bill Legalizing Abortion Up To Moment of Birth95
The Way of Christ Is The Way of Love76
Brooklyn Street Co-Named for Antiochian Pastor Who Served a Half Century There61
Metropolitan Hilarion: the Church and traditional confessions have done everything possible to improve the situation in Kazakhstan51
First Church in the Antiochian Archdiocese Named for St. Xenia of St. Petersburg Prepares for Feast Day47
Metropolitan Hilarion Celebrates the 20th Anniversary of His Episcopal Consecration45
My World’s Different44
Patriarch Porfirije of the Serbia: Our Position on the Church Issue in Ukraine Has Not Changed13
The Apostles’ Fast and Theology1
Most popular authors
Frederica Matthewes-Green220
Pravmir.com team156
Ryan Foley95
Fr. Theodore Stylianopoulos76
Peter Samore61
Protopresbyter Themistoklis Mourtzanos44