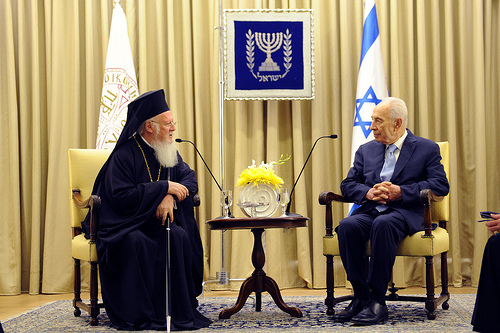 The Ecumenical Patriarch visited Vad Yashem, where he laid a wreath and prayed for the victims of the Holocaust. In his brief statement delivered outside the children’s memorial, His All-Holiness said:

Already 70 years have come and gone, and for some, the Holocaust seems to be a story from the distant past. Yet, we still have not completely healed. What is more tragic is that we have not fully comprehended the lessons of this singular event in world history . . .

We condemn every act of terrorism, anti-Semitism, and xenophobia. We must publicly profess that a crime against believers of any faith is an abomination in the face of God.

In his conversation with all three political leaders, His All-Holiness stated:

We were delighted that both President Peres and President Abbas accepted the invitation of our brother, Pope Francis, to visit the Vatican in order to reflect on a peace initiative. We assure you that our wholehearted prayers will accompany them in their travels and their deliberations.

These meetings conclude the Apostolic Pilgrimage, the meeting between Pope Francis and Ecumenical Patriarch Bartholomew in the Holy Land and the commemoration of the 1964 meetings of their predecessors, Pope Paul VI and Ecumenical Patriarch Athenagoras. The initiative for this meeting originated during the installation of the new Pontiff in March of 2013. In a manifestation of Christian love and mutual respect, Ecumenical Patriarch Bartholomew personally attended the enthronement of Pope Francis. This was the first time in recorded history that a Primate of Constantinople attended the installation of the Primate of Rome. During those celebratory days, the agreement to commemorate this remarkable anniversary was born in their private meeting.

This afternoon, the Ecumenical Patriarch departs Israel for Istanbul from Ben Gurion Airport.