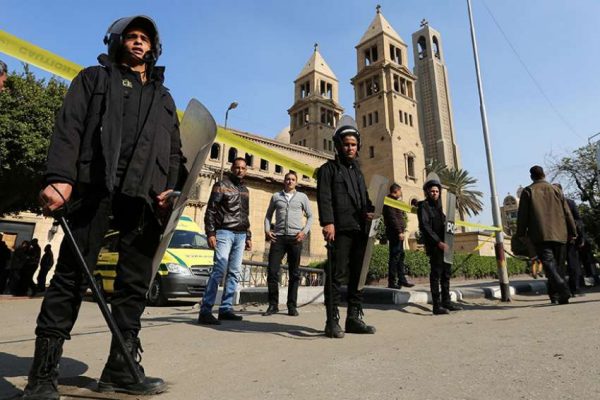 Members of the special police forces stand guard to secure the area around the Coptic Orthodox cathedral complex Dec. 11, 2016 after an explosion inside the complex in Cairo. Photo/Mohamed Abd El Ghany, Reuters

The April 16 arrests take on greater importance as Pope Francis prepares to visit Egypt at the end of the month.

According to Aid to the Church in Need, the arrests of these terrorists reveal “how these extremist groups continue to target the Christian community after the double attack against two churches in Tanta and Alexandria on Palm Sunday.”

Suicide bombing attacks against two Egyptian Churches on Palm Sunday (April 9), which caused the death of 44 Christians and injured more than 100, have led the authorities to implement security measures outside churches. In a separate incident Tuesday (April 18), gunmen opend fire at a police checkpoint near the historic St. Catherine’s Monastery leaving one dead and four wounded. The Islamic State have claimed responsbiltiy for all three attacks.

The Egyptian government has decree a state of emergency for three months, to which was joined the decision by some Christians to celebrate Easter Sunday discretely.

Egypt has a population of 92 million people who are mostly Muslim. Christians are about 10 percent of the population, and have been victims of a number of recent attacks and assaults.