Source: Christian Today
Natalya Mihailova | 15 August 2016
A group of Egyptian Christians took part in a rare protest in downtown Cairo on Saturday, saying that they are being treated as second class citizens in the Muslim-majority country and calling on the Government to defend their rights. 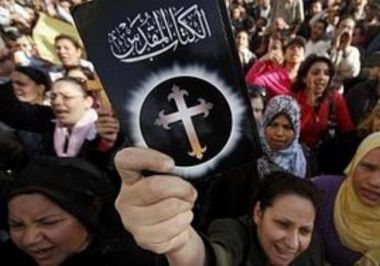 Reuters. Coptic Christians hold a protest rally in Egypt to denounce attacks on their community.

Despite a draconian ban on protests in Egypt, some three dozen protesters held signs demanding rights in disputes between Muslims and Christians.

“I am an Egyptian citizen above all,” Michael Armanious, a Christian demonstrator told AP. “We pay taxes, we serve in the army, we are dealing with all the same economic problems in Egypt with the rest of our countrymen, why should we have fewer rights?”

The protest was dispersed by police after an hour.

It came after a string of attacks against Christians, especially in the Minya region, home to a relatively high proportion of Coptic Christians.

Last month, police arrested 15 people after an arson attack on homes belonging to Coptic Christians in an Upper Egyptian village.

Days before that, the Coptic Orthodox Archbishop of Minya, Anba Makarios called on police to enforce the law protecting citizens from sectarian violence, saying that attacks are taking place at an average of one every 10 days.

On July 5, an Orthodox Christian nun from Mar Girgis Monastery in Old Cairo was killed after reportedly being hit by a stray bullet on the Cairo-Alexandria Highway.

June saw the assault on homes of Christian families in the village of Karm el Loofy, the burning of a kindergarten run by Christians in Minya, and the murder on June 30 of Rafael Moussa, a Coptic Orthodox priest of the church of St George.

In May, also in Minya, a 70-year-old Christian woman – said to be the mother of a man who was allegedly romantically involved with a Muslim woman – was stripped naked by a mob of 300 Muslims and paraded through the streets of her village.

Tensions between Christians and Muslims have intensified in the country since the Arab Spring of 2011.

The worst single incident came in February 2015, with the beheadings by Islamic State of 21 Egyptian Christian migrant workers.

Egypt has an estimated population of 9 million Christians. Mostly Orthodox Copts, they account for about 10 per cent of Egypt’s population, which is overwhelmingly Sunni Muslim.