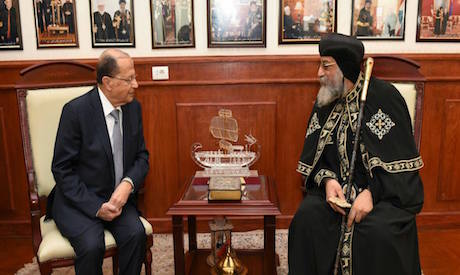 In an official statement, a spokesperson from the Coptic Orthodox Church’s said Aoun gave a short speech during his visit with an official delegation to the papal seat at Cairo’s Saint Mark’s Cathedral, expressing his happiness to visit Egypt.

“We live in difficult times, especially with the world around us aggravated by a sectarianism that was able to destroy many areas. Our visit is an emphasis on the spirit of fairness and love,” Aoun said in a speech.

Aoun added that despite the internal divisions Lebanon still faces, the country preserves relationships between various sects. He described the small Levantine state as a “model for the global civilisation.”

“We pray for the stability of Lebanon, the Lebanon that is mentioned in the bible. All the arts, literature, poetry, and beautiful aspects of humanity… we remember in Lebanon,” the Pope said.

Tawadros added that he hoped Aoun’s visit would strengthen ties between Egypt and Lebanon, saying that cooperation between the two countries enriches diversity, unification, and interdependence.

The Coptic Pope told Aoun he maintained “good relations” with Grand Imam Ahmed El-Tayeb of Egypt’s Muslim institution Al-Azhar, adding that “love and respect for the other is what builds nations.”

Tawadros said he also enjoys good relations with Egypt’s President Abdel-Fattah El-Sisi, the cabinet and its Prime Minister Sherif Ismail, as well as other Christian sects in Egypt.

“We are building a new Egypt; the country is developing right now in terms of stability. You might have noticed mega projects like the new administrative capital, land cultivation, and other projects,” Pope Tawadros II said, speaking about the government’s ongoing efforts on development.

Most viewed articles
Our Lenten Journey155
Moses and the Ten Words131
COVID Directives From His Eminence Metropolitan JOSEPH131
Serbian Patriarch Porfirije Gives Interview to Serbian National Television114
The Wrath of God According to St. John Chrysostom112
New Film about Orthodox Christian Vision on Climate Change111
In Church and at Home: Liturgical Resources for Great Lent85
Bishop Benedict of Bistrița in Relation to Young People: I Want to Be One of Them42
Why We Pray For The Dead1
How We Worship: the Struggle of the American Experience1
Most popular authors
Pravmir.com team225
Priest Luke A. Veronis156
Archpriest Lawrence Farley131
Archbishop Joseph of New York and Metropolitan of All North America131
Archpriest Michael Gillis112
Peter Samore85
Aurelian Iftimiu42