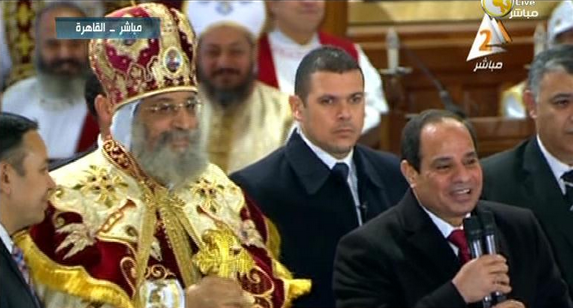 The show of solidarity was welcomed by the country’s eight million orthodox Christians whose Christmas this year is being over shadowed by an increase in violence from Islamist extremists.

However amid tightened security worshipers still managed to mark the day and several talked to euronews:

“We can say we are fine, kind of, but we feel this atmosphere of fear, in general the situation is okay – the terrorist attacks do not differentiate between Christians and Muslims here,” said one man.

“We hope this year there will be with no sorrow, tears and exhaustion but instead it will be full of joy for all of us,” said his female companion.

Reporter Mohammed Shaikhibrahim summed up
his conversations with those who had come to celebrate the birth of Jesus and the start of the New Year:

“Hoping for a better year compared to the last one, hoping its free from terrorism and full of peace, that’s the repeated message coming from the Christian Orthodox church here in Egypt, a country that is still trying to restore security and stability despite many challenges.”